North Carolina mother of two Suzanne Story has been mauled to death by a pit bull she adopted a week ago after deciding it was ‘good with children.’

The woman’s death came after the dog, which Story had ironically come to call ‘my big baby’ suddenly attacked her Wednesday afternoon.

Despite medical air crews landing at the family home at Perquimans County, Suzanne Story died of her injuries as they sought to take her to Sentara Norfolk General Hospital.

Pursuant to the mother’s death, Story’s stepfather, Randy Brown told of Suzanne adopting the dog last week in Virginia after seeing it advertised in a newspaper.

At the time of the acquisition, the previous owners told the mother that the pit bull was well behaved and good with young children. The owners gave Story the pet free of charge.

Reiterated Randy Brown via WVEC: ‘I think they had a problem with the dog and didn’t know how to handle it, and they were just trying to get rid of it, and they did,’

‘Found somebody that would take it, and ended up with a death.’

Adding: ‘Brought the dog down here, and said that the dog was gentle, it was good with people, good with children, it had never attacked any person,’

‘Why a dog would attack her, I mean, is beyond me, but it had to have been the dog, not her.’

Story’s mother, Debbie Brown, said the attack took place just after noon whilst her daughter was cleaning the dog’s crate.

Story’s sister tried to pull the pit bull off the victim and also suffered unspecified injuries.

Neighbor Jonathan Nash says he saw Story walking the dog a few days ago and noticed that the woman was having trouble controlling the large brown-and-white canine.

Since Suzanne’s death, her stepfather has called to have the pit bull’s previous owners held responsible for his stepdaughter’s death.

Told Randy Brown: ‘They need to do something, because they lied to us,’

‘They told them it was good-natured.’

Tributes have since began pouring in on social media, with Story’s estranged daughter Cheyenne paying tribute to her mother on facebook, posting: ‘I can’t express how sorry I am I didn’t treat you better… We had are differences but she was my mother.. And always will be ..R.I.P momma.’

In the comments section, the teenager came to the defense of pit bulls, saying ‘Any dog can snap.’

‘This dog was very loving… She says it was her big baby,’ she wrote.

Suzanne Story leaves behind 15-year-old and 17-year-old daughters. Her Facebook page suggests that she also had at least three other, smaller dogs and at least two cats. 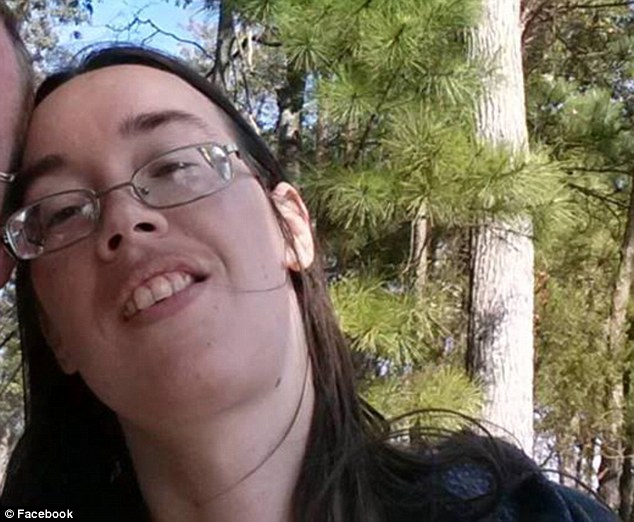