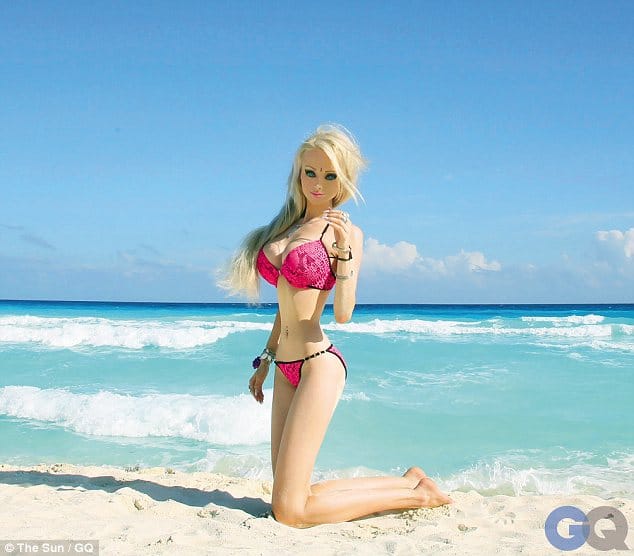 It seems there may be little love lost for Human Barbie ‘Valeria Lukyanova‘ after opining that inter racial breeding has made the human race uglier.

Confided the cosmetically enhanced 28 year old model to GQ magazine: ‘Ethnicities are mixing now, so there’s degeneration, and it didn’t used to be like that.

‘Remember how many beautiful women there were in the 1950s and 1960s, without any surgery? And now, thanks to degeneration, we have this. A Russian marries an Armenian, they have a kid, a cute girl, but she has her dad’s nose. She goes and files it down a little, and it’s all good.’

Further along the interview Human Barbie ‘Valeria Lukyanova’ confides the idea of having a family is abhorrent to her.

‘The very idea of having children brings out this deep revulsion in me,’ she said.

‘I’d rather die from torture because the worst thing in the world is to have a family lifestyle.’

The human barbie of course is no stranger to controversy having first come to the attention of the world in 2012 after what the heavily plastic surgically altered model began making what she called ‘spiritual counseling videos.’

At the time Human Barbie Valeria Lukyanova’s features sparked controversy with many wondering if she was real or fake or even just a life sized doll.

Nevertheless the model insisted that she had only received breast implants and that her appearance were otherwise the result of diet and exercise. A claim that many have found unrealistic and wishful thinking at best.

One such individual doubting or at the very least questioning Valeria’s authenticity was the GQ author, Michael Idov, who came to interview Human Barbie ‘Valeria Lukyanova.’

Writes Idov: ‘Her mouth is frozen in a vacant half-smile; the teeth are small and almost translucent. She’s holding a handbag shaped like a lantern. A one-eyed smiling-skull pin perches on her sky blue top, pushed to the side by the veritable shelf of silicone around which her whole body seems arranged.’

Ms Lukyanova has made headlines in the past courtesy of claims that she is ‘not human’ and ‘can time travel.’ Interestingly Human Barbie ‘Valeria Lukyanova’ has also previously claimed she is capable of surviving on energy from the sun rather than food.

And then there were these comments on the web that brought out a rueful smile from this author:

Why is she relevant! She is made out of plastic!

She is one sick girl.  Please don’t come to the United States.  You are not a roll model for our young girls.

What makes the Human Barbie are her flaws, if she ever dared revealed them…