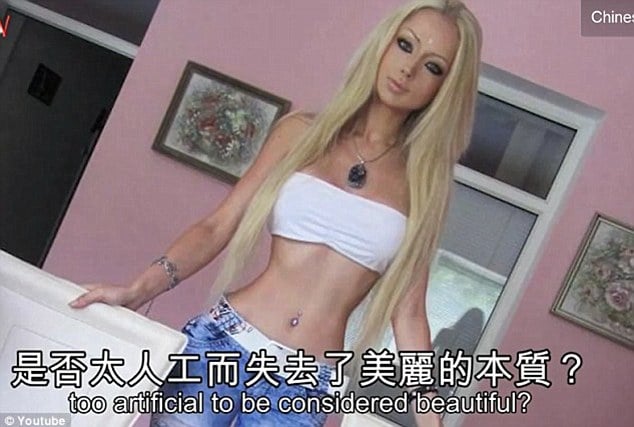 Ukranian model, Valeria Lukyanova otherwise known as the human Barbie in a bid to become ever more svelte has revealed in recent days she does not need to consume food or water anymore.

To date her thin waist has raised questions as to how she manages to keep such thin appearances, with many wondering if it’s just not the use of photo shop, or plastic surgery. Others have suggested it’s because the human Barbie has literally stopped eating in recent weeks.

In recent days the model has told she is converting to ‘breatharianism,’ training herself to live off light and air. Acccording to the cult one trains themselves to exist off cosmic food. What cosmic food stands for has yet to be articulated.

Told Valeria Lukyanova: ‘In recent weeks I have not been hungry at all; I’m hoping it’s the final stage before I can subsist on air and light alone,’

Breatharianism has been criticised as potentially lethal pseudoscience, and several practitioners have reportedly died of starvation. None have submitted themselves for comprehensive medical testing.

With her pinched waist, skeletal arms, enormous colored contact lenses, thick make-up and vacant expression, Valeria believes she has become a living, breathing Barbie – something she sees as the ultimate embodiment of perfection.

But it gets better. Along with the human barbie’s air and water diet, the model has told that she has now trained herself to speak with aliens through light. Furthermore she thinks she has the ability to time travel and has had out of body experiences.

In an interview with Vice, the Human Barbie confessed she believes she is from another planet, possibly Venus, but isn’t quite sure. Nevertheless she is adamant that she is not human.

A récent visit to her psychiatrist had the Human Barbie telling how she heard voices in her head. Possibly those of aliens.

While acknowledging she has become the object of hate within some internet communities, away from YouTube and Tumblr, Valeria tells that she works in new age opera, while being supported by her construction-working husband who also acts as her manager.