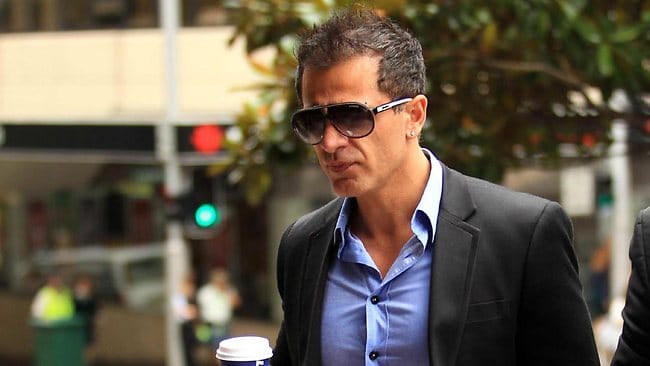 It seems the world is finally getting a good look in at the sordid affairs of Simon Gittany who went on yesterday to be found guilty of murdering former fiance Lisa Harnum.

With the courts mandating local media keeping a tight lid on the mystery man’s background (save for the fact he was a businessman but what kind remained a mystery) during his trial it wasn’t until after the verdict was read that local Aussie media began to report on the sordid details that represented the ongoing nature of Simon Gittany.

Behind the cool exterior the ‘businessman’ exhibited during court proceedings and his accessory handbag, model attache girlfriend Rachelle Louise lay a secret as to who the real Simon Gittany was.

In a new report released today the Australian goes on to relay a disturbing portrayal of Gittany and his associates linked to the production of crystal meth.

The Australian revealed yesterday how Gittany, a former drug dealer, founded a company in May last year with Christopher Stephen Jacques and Jamie Shaun Hijniakoff, who were facing charges of manufacturing drugs in a metal shed at Tennyson, northwest of Sydney.

While police have been loathe to publicly tie Gittany to the production of the drug, sources close to the Australian paint a disturbing correlation:

Company documents show that Gittany, 40, registered Chemright Pty Ltd as an equal partner with Jacques and Hijniakoff on May 29 last year.

Police broke into the drug lab and installed secret cameras while Jacques and Hijniakoff were away in August 2011, and monitored the pair as they produced 3,4 methylenedioxyamphetamine — also known as Mandy, Sass or MDA.

Interestingly Simon Gittany went on to deregister the company on August 26, less than two months before his murder trial began in the NSW Supreme Court.

The release of the report follows similar stories of the small time thug who was booked in the early 90’s for the acquisition of stolen goods being arrested in connection to him facilitating as a cocaine dealer in the early 2000’s.

Nevertheless the mysterious ‘businessman’ was able to live a life of glam and panache as he went on to date ‘beautiful women’ as well as being able to afford to pay $1000 AUD a week for his luxury Hyde Park apartment dwelling.

Further investigation by local media found Gittany to be a director of various corporate endeavors, including including one called Shecandy P/L, which has lodged no financial records with the Australian Securities and Investments Commission.

Whilst Gittany attempted to portray his former fiance as a young woman on the verge of suicide what went unsaid was how the thug actually went on to ruin her life by acting to control her to the degree of how she publicly presented herself, where she worked and whom she associated with. It wasn’t until the former Canadian ballerina had had enough and wanted out that an enraged Gittany sought to exact his brand of revenge.

Tells the dailytelegraph of the dapper Gittany who would take the time in front of cameras during court proceedings to exhibit his purported fine manners:

His demeanour as he stood with them, slightly taller, slightly better looking, was of the cocky golden boy who can do no wrong.

In the end an innocent woman who went on to trust the cool exterior that Gittany sought to portray to the world went on to be hoodwinked and eventually lost her life.

Who was not hoodwinked was the public who at last got the justice it felt it deserved as Gittany the misogynist sought to control and establish that he was the real man, never mind the mad illusion of who he really was and quite capable of….

So much for the parochial ‘Aussie bloke’ who always knows better…