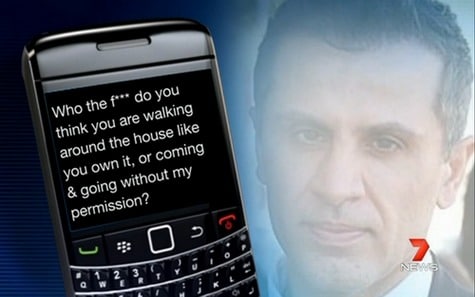 Simon Gittany has had his bail revoked by Justice Lucy McCallum as she told her decision at the request of the prosecution was not a reflection of the evidence before her but rather the fact that the case had reached the closing stage it had.

She went on to tell she believed the defense counsel no longer required the services of Gittany, 40 in assisting in his legal case as all evidence had been rendered to the court and all that remained were closing remarks from both prosecution and defense.

Told Justice McCallum: ”What the Bail Act says is that I am not to grant bail unless satisfied of exceptional circumstances,”

She then went on to reiterate that she now saw no ‘‘exceptional circumstances” for Mr Gittany to remain on bail.

Nevertheless the decision brought Simon Gittany model girlfriend,24 year old Rachelle Louise to tears as she broke down after told of the court’s decision.

Before Mr Gittany was remanded in custody he answered questions about a portable hard drive he hid from police during their investigation.

At the time Simon Gittany was in jail when he asked his brother to remove an external hard drive from the ceiling of his Sydney unit. He told the court last Thursday that he hid the hard drive from police because he did not trust them.

He had gone on to tell he had no idea where the hard drive was but the next day it was brought to court by an IT consultant who has done previous work for the Gittany family.

Asked the prosecution Mark Tedeschi: ”Did you go and get the hard drive [on the day of Ms Harnum’s death] and take it to your parents’ place?”

Told Simon Gittany: ‘‘No, that wasn’t on my mind,”

What has remained of mystery is why Gittany would choose to not present the video but rather tamper with it in order to reassert his purported innocence. It is thought that the hard drive may have recorded the crucial last 69 seconds of the time Simon Gittany dragged his then fiance back into the apartment against her will which CCTV footage outside the unit door caught and her subsequently falling to her death there after.

The court has previously heard how Gittany installed security cameras in the home and the drive was capable of recording footage from them.

Gittany denies using the cameras to spy on his fiancée despite conceding he was a “jealous” lover. During testimony he had told he had only put cameras up in order to ‘protect’ Harnum.

Justice McCallum is expected to take several weeks to consider her decision once final submissions are made on Wednesday.