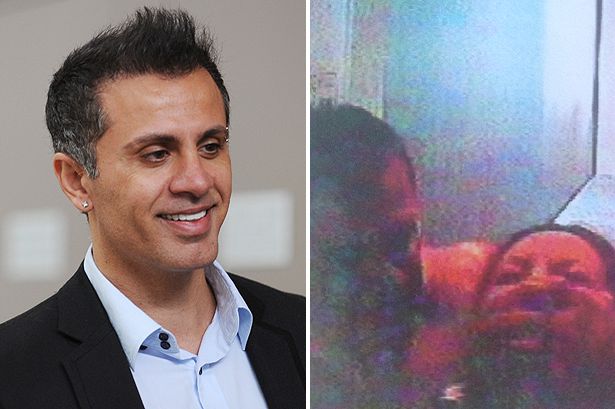 The denial came as the Australian well to do 40 year old businessman laughingly recalled tender moments he and his deceased fiance spent together as the courtroom was shown at the behest of the defense team, video of the former couple engaging in intimate moments.

Nevertheless what piqued the prosecution’s interest was why Simon Gittany went so far as to outfit the outside of the couple’s luxury flat with a pinhole camera which would record who would enter and leave the couple’s flat.

In responding to why he had installed the camera, Simon Gittany told: “Lisa had a secret she didn’t want to tell me,”

In attesting to whether he had gone overboard in monitoring his fiance’s actions Gittany replied: “I wanted to find out what it was …I was very confused and upset and frustrated because my partner was hiding something from me.”

When probed further, the Aussie businessman told the only reason he installed a pinhole camera outside the door of their unit and another two inside was to keep an eye on tradesmen and the cleaner he employed. This despite assertions in previous court hearings by witnesses who told Simon Gittany was overbearing and controlling.

Previously the prosecution had posed whether it was had been Simon Gittany’s purported controlling and obsessive nature that may have inspired his then fiance to want out of their relationship?

At the time the prosecution went on to argue rather than allowing his fiance to leave, Gittany sought instead to exact retribution.

At the time of the Canadian ballerina’s death, cops had come to find suitcases with Harnum’s packed belongings as well as a note in her jeans whereby she acknowledged she was always being watched.

Asked why Harnum had chosen to pack her bags and leave, Gittany responded that he had been the one to ask Harum to leave.

“I told her to pack her bags and she could leave tomorrow.”

That said after a “sudden” change  of heart, Gittany purportedly told his fiance the next morning not to leave which led to the couple having a physical altercation which went on to be caught on CCTV surveillance outside of the couple’s flat.

At the time, Gittany went on to be video taped dragging a resistant Harnum back into the flat, where upon, according to Gittany, Lisa Harnum then ran towards the couple’s balcony where she then purportedly slipped to her death. This despite Simon Gittany’s alleged efforts to stop her from doing so.

Told Gittany to the court: “When I stepped outside, my first view was of Cecilia and she was already over the balcony railing.

“I screamed out her name. I instantly just reached out toward her with both arms. As she released herself down on to the awning (of the floor below) and her right leg buckled and she fell to her right.

“Cecilia looked at me … I pushed myself on to the balcony railing (and) I reached down as far as I could to try to get hold of her legs, of any part of her. I couldn’t reach, she was too far.

“After I couldn’t reach her, it was like she just disappeared or let go, I’m not too sure.”

Gittany then said she dropped hard on to the awning, and the impact “acted like a springboard and sprung her out forward.”

“And then Cecilia began to free fall,”

“I screamed her name out … I kept my eyes on her the entire time until she hit the ground. I’ve never seen anyone die before, let alone anyone I am so close to.”

Interestingly the court went on to hear that Lisa Harnum’s fingerprints were not  found on the balcony window pane whilst Simon Gittany’s were.

The court also heard that it was also possible that Lisa Harnum may have touched the balcony window pane and not have left any marks either.

What is of note is why there ended up being no video footage of what happened between the 69 seconds when outside CCTV footage shows Gittany dragging Harnum back into the flat and him subsequently running back out  in catastrophic terror towards the elevator banks.

Some have wondered if Gittany may have erased video footage of the altercation that transpired in the couple’s apartment which then saw Harnum either falling or being pushed off the balcony ledge. That said it is not readily understood if video footage necessarily existed of the ongoings of the couple, this despite Mr Gittany’s admission that he had installed such cameras inside the flat, as well as outside the flat.

In describing the couple’s relationship, Gittany’s defense barrister, Philip Strickland, SC went on to tell that the couple had a loving and affectionate relationship but one which was a constant “roller coaster” and “dysfunctional,” one.

Simon Gittany went on to tell the court via his defense’s prompting that Lisa Harnum was highly emotional, suffered from eating problems, as well as had few friends and often cried.

This despite the fact that Simon Gittany admittedly kept close tabs as to whom the former ballerina kept in touch with whilst he spend inordinate amount of time with his “mates.”

Simon Gittany went on to speak of several “incidents” in which Lisa Harnum had run in front of traffic and jumped out of moving cars when she was upset.

Recalling one particular incident, Simon Gittany went to tell how Harnum had purportedly told him:

“When I get upset I genuinely don’t know what I’m doing. I just act and I don’t think. I’ve always been like this.”