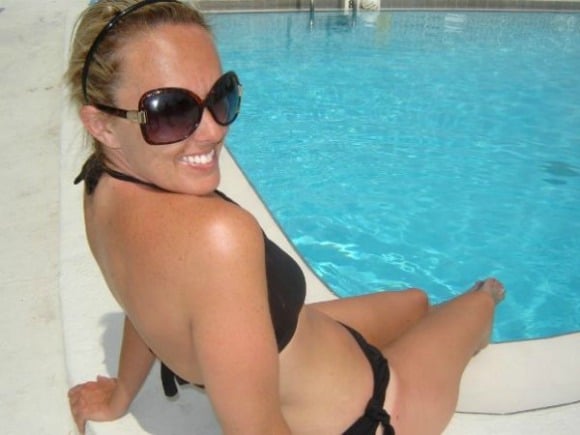 It’s been two years since To Catch A Predator host Chris Hansen was purportedly outed to be having an affair with TV reporter Kristyn Caddell. Nevertheless Caddell has decided that it’s time to tell you all how messed up things really were.

In an open letter published in the equirer (does that make it more or less legitimate?) Kristyn Caddell decides to hold no bars as she re tells in interesting detail the specifics of their 4 month tryst which in the end left her a wounded soul and her promising career in ruins.

Caddell, 32, says she met the 53-year-old “Dateline NBC” correspondent in a Palm Beach, Fla., bar in March 2011, and he led her to believe his nearly 20-year marriage was on its last legs, so he was free to date. Naturally.

Recalls our heroine in a scathing letter: “Chris told me a divorce was inevitable and the wedding ring on his finger was all but for show,”

“Over the next several months, our friend­ship evolved into a whirlwind romance. As far as I was concerned, none of it was being done secretively or concealed from the public.”

Cadell goes on to tell how Hansen flew her all over the country, and the couple stayed in “the finest hotels,” according to her letter. They had dinner and mingled “with many of his colleagues,” and our heroine has even gone so far as to supply The ENQUIRER photos of the two of them together in public places. Because key memories are a must.

“He would even speak with my family on the phone. Chris gave me no reason at all to believe our relationship was a secret, and I trusted him implicitly,”

Caddell goes on to tell she didn’t learn Hansen was lying about his marriage (never mind as a reporter one would think she could ferret such details out) until just before The ENQUIRER’s damning report of their relationship. From there it was all downhill.

“My trust in Chris was shattered,” writes our heroine in her open letter.

“I learned that our relationship was not as it was presented to me… There was nothing that could prepare me for the awful turn my life was about to take.”

A news reporter with WPTV in West Palm Beach at the time, Kristyn Caddell was eventually fired, and although she claims Hansen promised to help her find a new job, Caddell goes on to tell that Hansen essentially wiped her existence off his black book as she has struggled to make inroads on account of  “all the negative press surrounding me.”

Interestingly, a source has gone on to tell the Enquirer that Hansen denied the affair the entire time to his wife, hoping to save his marriage.

“Chris has denied the affair since day one, and (his wife) Mary believed him,” the source said.

“The last thing he wants is for her to find out the truth about his affair with Kristyn, because it will likely push her to file for divorce.”

After WPTV officials demoted her to the West Palm Beach NBC affiliate’s Treasure Coast bureau, gossipextra goes on to tell how Caddell mysteriously vanished from the airwaves six months later with no explanation from management.

In early 2012, she drove across country and turned up at KOMO in Seattle. She didn’t last a year. Can anyone guess why?

From there Caddell found a job at KSVN in Las Vegas this spring but she suddenly walked off the job last week, according to the TV trade website NewsBlues.com.

“I don’t wish any harm on Chris,” Caddell writes in conclusion in her open letter. “Yet, our affair has essentially destroyed my professional career.”

What do you think kids? You reckon our heroine wishes her former heart throb any harm? And what about her career? Will turning up in the tabloids once again lead to the resurrection she’s looking for? Maybe Kristyn ought to consider blogging for the tabloids. After all there’s never a shortage of yummy stuff to write about. Right Kristyn?

To read about Kristyn’s nosedive, see open letter below…

Two years ago a scandal involving Chris Hansen and myself broke in the National Enquirer nd, regrettably, my life was never the same. At the time, I desperately wanted to tell my side of the story, defend myself against the very media from which I was earning a living as a news reporter, protect my livelihood and my family, and salvage my reputation. It was against my better judgment to take the harsh media scrutiny lying down and not defend myself against the salacious stories, but I trusted Chris when he advised me it was in both of our best interests to remain silent about our relationship. “Don’t worry about this,” he assured me at the time, promising to help me find a new job if there was any fallout from the scandal. “This will all blow over and everything in your life will be fine – your career, your reputation, your livelihood – everything will be fine.”

In hindsight, putting that much trust in Chris proved to be the most damaging mistake of my life, particularly to my professional career. But, hey, why wouldn’t I trust him? He was Chris Hansen – a highly respected journalist, responsible for bringing down child predators, identity thieves and con men on national TV. As a fellow journalist with a long list of achievements that took me many years to amass, I admired Chris’ professionalism and his many accomplishments in the field. So, naturally, when I met Chris for the first time at a Palm Beach bar in March 2010, and he kindly offered me, my brother and several friends a place to sit, we were happy to oblige. Chris and I quickly discovered we had more in common than our careers.

As the evening progressed, Chris’ stories took a turn from his award-filled career to his personal life at home, which, according to him, was filled with misery and on the verge of disarray. He told me a divorce was inevitable and the wedding ring on his finger was all but for show.

Over the course of the next several months, our friendship evolved into a whirlwind romance, and, as far as I was concerned, none of it was being done secretively or concealed from the public. In fact, Chris and I were so open with our relationship that I was confused as to how something that I already thought to be public knowledge could have exploded into tabloid fodder. Chris was flying me all over the country; putting us up in the finest hotels; having dinner and mingling with many of his colleagues; having our photographs taken together in public places; he would even speak with my family on the phone. Chris gave me no reason at all to believe our relationship was a secret and I trusted him explicitly.

My trust in Chris was shattered on Monday, June 27, 2011 – three days before we were thrust into an international scandal by this very publication, the National ENQUIRER, and I learned that our relationship was not as it was presented to me.

I ended my physical relationship with Chris, but, at 30-years-old, I had never experienced anything that hurtful or publicly humiliating, and felt like my best option was to maintain contact with him and weather the storm together. There was nothing that could prepare me for the awful turn my life was about to take. As the scandal raged out of control on the Internet, TV and print mediums, I was approached by dozens of journalists, each giving me the opportunity to comment, but I trusted Chris’ advice and remained silent.

Months later it became evident to me what a poor decision I’d made by not defending myself in the media and not being honest about my relationship with Chris with my employers at a news station where I worked in West Palm Beach. I eventually lost my job. It was the news station where I began as an intern and years later they gave me a reporter position, so I felt I’d let them down and let myself down as well.

I take full responsibility for the choices I made to get into this situation, and acknowledge I made many mistakes that I will forever regret.

Since losing my job in Fla., I’ve interviewed at dozens of television stations across the country. Sure, there have been a few news directors willing to give me a chance, but in lieu of dialogue about my skills as a reporter and passion for journalism, I’m prodded to address any number of sensational tales that are swirling about me and Chris on the Internet, most of which are completely false.

Several months ago, I took a job at a Las Vegas news station. It was the only news station I could find to offer me a contract, told by at least a dozen other big market stations after going through the interview process they could not hire me because of all the negative press surrounding me. Although grateful for that opportunity in Las Vegas, I resigned from that position last week because at this point in my career I feel it’s more important to finally set the record straight about the stigma that’s followed me for the past two years than to stay in a position that’s several steps back for someone with my level of experience.

I’ve worked tirelessly to be successful in my career and that’s suffered greatly because of the mistakes I’ve made in my personal life – and so I wrote this open letter to own up to my mistakes and to apologize.

I’m sincerely sorry for the pain my relationship with Chris has caused both of our families, and I apologize for the negative attention that this brought to my former employers in West Palm Beach. I know I can’t change what has happened, but I believe that being honest and taking responsibility for my part is long overdue. This was all just a snapshot of my life; it does not define my job performance as a journalist.

I don’t wish any harm on Chris, yet our affair has essentially destroyed my professional career.

It’s also a mystery to me how someone I considered to be a close friend and confidante was never the person he made himself out to be.