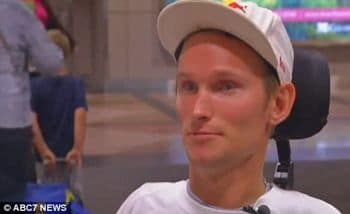 The demoralizing of passengers on flights continues unabated.

John Morris just wanted to go home, but as it turned out that turned out to be wishful thinking. Why? Let’s all strap in with our extended seat belts and find out…

dailymailco.uk: John Morris and his family had just boarded a Frontier Airlines flight in Dallas on Sunday to return home to Fort Collins when he was forced off the plane.

The 24-year-old Colorado State University student said issue was taken to him using an airline belt extension to secure his chest and legs to the seat, with the pilot deeming the standard practice unsafe.

What makes the case more perplexing is that on his way to Dallas, the carrier did not take exception to the very thing he was doing once again- that is simply strapping himself in with an extended seatbelt (due to his paralysis)- something that caused one of the flight attendant’s on this flight enough concern to report it to the pilot who then decided the issue also warranted concern.

Common sense would perhaps have informed the flight crew that the young man had little choice in the way he wore his seatbelt and it may well have been given his experiences with previous flights (he has been paralyzed for 5 years after a snowboarding accident) that what he was doing was quite logical. But as has become increasingly the case, logic has little usefulness when it comes to the airline industry.

After hearing the commotion, fellow passengers offered to help but the airline insisted it couldn’t use the straps for medical purposes.

Denny Cannon, who was also on the flight, said: ‘Me and other passengers said: “Well, sure, use our belts and we’ll somehow restrain him and then you won’t be using Frontier products.”‘

Of course the pilot was having none of it and he then sent for the police whom he now wanted to evict the passenger from the plane.

Despite reluctance from the officers, the pilot said: ‘He cannot fly. I want him off this plane,’ according to Mrs Morris.

‘It was humiliating,’ she said. ‘The officers kept apologising to me and to John and kept saying: “This is wrong”.’

John said he felt humiliated by the experience.

‘I felt horrible,’ he said. ‘I just felt like I didn’t belong. I haven’t felt that bad since the accident.’

As it turned out, authorities were able to get Mr Morris on to the next flight without any commotion. At present the issue does raise legitimate concern as to how an airliner handles someone like Mr Morris who in the remote chance of the plane stalling or crashing could prove to be an impediment by the fact he could potentially block the passage way to safety. But then again one could argue that if a plane were to crash, there would be many individuals who could potentially be incapacitated and unable to move out of the passage way so others may pass.

Once again, the airline industry has to have a hearty look at the nature of its business and less at stipulations which in effect  negate the intent of flying safely and smartly. So much for common sense…

17 month old child is shut in overhead bin on a Virgins airline flight.

Delta Airline’s pilot forces two religious leaders off the plane before taking off.