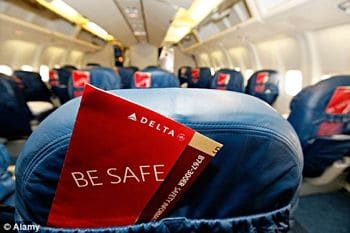 Intolerance and prejudice are becoming the preferred behavior.

It has been reported that a Delta airlines captain forced off his domestic flight  two muslim religious leaders, this after the two were cleared to board the flight emanating from Memphis going onto Charlotte, North Carolina.

Said Masudar Rahman, one of the clerics forced off the plane:

dailymail.co.uk: ‘It’s racism and bias because of our religion and appearance and because of misinformation about our religion. If they understood Islam, they wouldn’t do this.’

With the plane already pulling out of the gate and beginning to taxi onto the runway, the pilot decided to return to the gate after it was brought to his attention some passengers were feeling uncomfortable.

Which begs the question, was it a case of the air pilot himself feeling uncomfortable, despite what the passengers actually felt, or a situation that pursuant to the recent purported capture and death of terrorist activist Osama Bin Laden, the nation has been put on heightened alert for possible retaliatory action. Which strikes this author as particularly odd, because if there was any attempt to retaliate why would it be manifested by two conspicuous religious leaders?

Mr Rahman said Delta officials talked with the pilot for more than a half-hour, but he still refused to fly with them aboard.

The men were taken to a lounge and booked on a later flight. They flew on to Charlotte later the same day.

Mr Rahman said a Delta manager apologised for the pilot’s actions, but that he and Mr Zaghloul never spoke directly with the pilot.

As of current press time Ibrahim Hooper of the American- Islamic organisation said his agency will seek to follow up with the airline- which for its own part has kept quiet about the incident.

Isn’t it good to know that a pilot can have a final say as to whether you get on his plane or not, give or take the color of your jacket or racial profiling that inspires him.