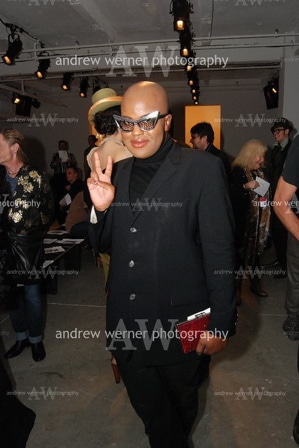 Coming in at number 10. Social whore:- Malik So Chic.

Strictly speaking Malik So Sick Chic is a media whore, and if memory serves us correct he placed rather well in our top ten media whores of NYC earlier this year (girlfriend came in at number 7, not bad for someone who’s only claim to fame is making out with himself, and an omnipresent photographer’s flash bulb).

Barely scraping in our top ten wanna be socialite list, Malik has been relentless despite the humiliation of his 13 second participation of much ballyhoo show ‘High Jinks,’ ‘High Society’ being yanked off the air and has clung to the mirage that somehow he still matters and is seen constantly mauling every camera man that comes his way with his over sized sunglasses and tiara that these days he has taken to stapling on his head so it doesn’t fly off as he rushes from one society party to the other.

Of course a girl can only keep teasing us for so long before eventually the master of the house forces his concubine out of the bed. Which begs the question, will Malik go back to anonymity, waxing chest hairs in a Chinatown beauty store or will he eventually find a naive producer to give him his own TV show where the world can ogle incredulously as Malik wakes up late in the afternoon to show us how he scrambles egg white omelettes, applies his favorite false eye lashes, and how he hangs out with his favorite bitches as they drink blood orange mimosas before reluctantly shuffling from one charity benefit to another, perpetually despairing their lot and hand picking at every hors d’oeuvres that comes their way?

Time is running out for this wanna be socialite whore and come Christmas we’re willing to bet if he doesn’t hustle his act he will be forced to go intern for Guest of a Guest if they will have him in the hope that he will still get to go to his favorite functions. Of course the other option is death and anonymity and at this stage of the game, we think it highly unlikely that Malik break down and take back his old job selling make up foundation for Macy’s.

Go to next page for socialite whore number 9: 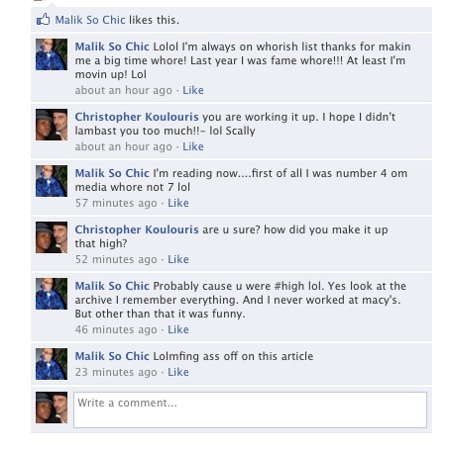