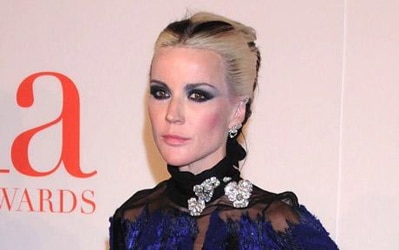 Society whore numero uno- ‘never repentant and I don’t give a damn if my bathtub is overflowing and leaking into your champagne flute downstairs,’ Daphne Guinness.

Daphness, or as our friends over at NY Gutter Post like to call her the ‘Brewery Highness Heiress’ in the event you didn’t know (which at this stage of the game would be heresy) is the undisputed champion of high brow ‘I am all over the place, muse of a famous dead fashion designer (Alexander Queen) and one still very large alive designer,’ (Karl Lagerfeld) and the prodigal heiress to a brewing dynasty.

With her vast impending fortune ‘Daphness’ as we at the office like to call her has been allowed to behave at will and leave her mark for all to see.

And mark she has certainly left for us to see. With her wonderful costumes and those shoes (yes kids here is a picture of her below) which even she can not help but trip in from time to time (but we dare you to wear uber tootsies and not fall on yourself at least 14 times a day) and her signature died black strip in her blond pony tail- this is a vixen that doesn’t smile but seethe and that of course is the way you like it. 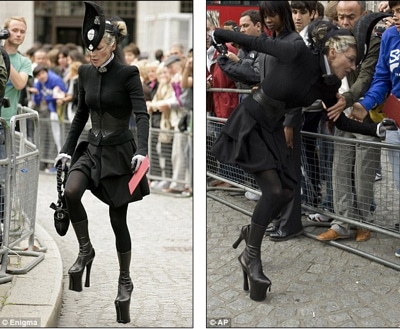 Guinness spends hundreds of thousands of dollars a year on haute couture and wears $300 Rick Owens T-shirts to the gym. She is a front-row fixture at fashion shows, a favorite of high-end designers, and was on the cover of Vogue Italia’s couture supplement in September 2008.