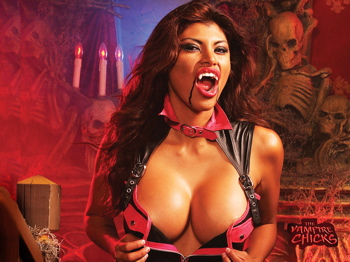 Although I may sound like the vintage Dana Carvey Grumpy Old Man character on Saturday Night Live, in my day we didn’t have sexy vampires to lust after.  We had a gawky, impish Cory Feldman in Lost Boys looking like a geisha Michael Jackson dressed as Johnny Cash for Halloween.  And if that didn’t stir your fancy there were the homoerotic tangles of Tom Cruise and Brad Pitt in Anne Rice’s Interview With A Vampire.  Don’t even mumble a word about Kirsten Dunst, you Polanski.

I guess what I’m saying is:  where are all the hot vampires bitches at?

Now before you mention the barrage of booby shots and steaming jiggle your bird Salma Hayek dance sequence in Dusk To Dawn – let me riddle you this Batman:  I’m talking about a smoke show of a lead character you can invest in.  I’m afraid to say like Kristen Stewart because she is only average and so short in real life she smells of earthworms.  I want a chick half-hottie, half-wolf character that appears every three scenes shirtless or at least in a bedazzled push-up bra (I think Victoria Secret just came out with a new padded vampire line or maybe it was Target).  OK, that would be lame if she was a wolf too.  Let’s make her a ferocious man-eating squirrel who is dainty but when angered turns into a nut-craving lunatic with big fangs and a nice round yet fluffy tail.

Movie geeks are kicking themselves reading this:  what about the beautiful vampire warrior Kate Beckinsale plays in Underworld?  Yeah, I don’t like British broads.  Bad teeth and breath and they remind me of an embarrassing nightmare I had once that involved me, Margaret Thatcher, Keith Richards, and a vinegar-soaked plate of fish and chips.  Plus, I’ve seen Asian porns with less over-acting and more character development.

Let me reference the epic Blade character.  Even if Wesley Snipes makes you think about how the country sodomizes us in federal taxes – you have to admit – the dude is a bad-ass and chiseled like a Greek statue dipped in a keg of Hershey Kisses.

How about a female counterpart in the same vicious vein?  Hell, just drop the B. We can call her Lade.  Perfect.  Throw some contacts on Jessica Alba.  Get the latest MTV poser who directed the last Lady Gaga video. Cue the sun. Add water. Box-office cheddar.

I have to admit when the first Twilight (2008) came out, I didn’t take the bait until it became a worldwide sensation.  To me it was Saved By The Bell the movie with close-ups of luminous faces that weren’t Screech’s or Slater’s and bigger-than-life emotions of melodrama that didn’t belong to Lisa’s loss of her lipstick or Mr. Belding’s priest tendencies.

But once I gave into the temptation, like the rest of America, I was hooked to the sappy phenomenon like Elton John watching Glee for the first time.

Maybe it’s because the whole reality is like holding a mirror to my own life:  an average person in a boring town with pretentious friends bumps into a superhuman who drinks the blood of wild animals and possesses eternal beauty and invincible powers.

No, my bad, that is another dream I had with Margaret Thatcher and Kirsten Dunst.  Don’t judge me – I was Spiderman and she was Mary Jane.  Thatcher held the video camera.  Don’t believe me?  Check TMZ or YouTube, pervs.

Twilight Fan Lied About Getting Bitten…Why?

Twilight Fan Gets it in the Neck.

Hiding from the lights: What life as a vampire is really like for Robert Pattinson.