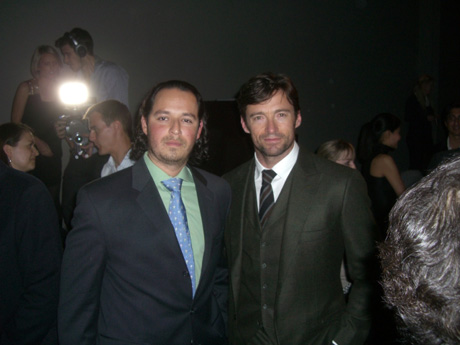 The cocktail invite said: “presented by Donna Karan, Lisa Fox and Deborra-Lee Furness and hosted by Hugh Jackman.”  Sounds like a light hearted soirée, perhaps filled with entertainment and fashionistas.  Someone writes a check for a cause and everyone goes home tipsy with more phone numbers in their pockets not knowing what the cause is even about, right?  Let’s just say this:  wrong, wrong and wrong again on almost every account (there were some fashionistas).  The topic of this very serious evening centered on not just poverty but “extreme poverty” which is defined by the World Bank as living on less than $1.25 US Dollars per day (thank you Wikipedia).  It is also estimated that 1.4 Billion people live under such conditions (hence the title of the event).  How’s that for lightening the tone of a cocktail party?

Hugh Evans, founder of Global Poverty Project and also a native Australian (yes two Hugh’s from down under, mate) spoke for the majority of what seemed to a very long but informative presentation.  He had flow charts, equations and questions and provided some answers (let’s face it, who does have an answer for 1.4 Billion people in extreme poverty? No one), whilst in the middle of it all, I was on a comfy couch sipping down a Grolsch beer.  One comedic point Hugh Evans pointed out was that more people are concerned with having greater sex, combating erectile dysfunction and combating hair loss vs. assisting global poverty initiatives.

Just as I began to feel bad for throwing away my left over Chinese fried rice and purchasing Propecia the other night (I don’t use Viagra – yet), I ran into a familiar face.  It was the lovely Christina Ware from Ralph Lauren, dressed in of course, RALPH LAUREN.  As the lights turned on I began to see more familiar faces popping up and I began to think, “it’s not as if I could have simply mailed my left over Chinese fried rice to another continent now could I?, And if I had, who would I have sent it to?  How long would it have taken to arrive?  And would it have been even edible? And damnit, I LIKE MY HAIR!!!” Now I began to start thinking about extreme poverty in the movie Slumdog Millionaire and it seemed in order to combat it I would need to donate money, perhaps “write a check” or donate time for awareness.  Maybe raise funds by throwing a “party for poverty” and write an article to help spread awareness.  So I headed to Hugh Jackman immediately and gave him my card as well as a few of my ideas and he said “great, that would be great mate”. The man is all class and I see why he is the perfect member on the advisory board for this organization.  He is really down to earth and a champion.

Grabbing awareness seemed to have worked. I realized that by not asking the crowd to donate time or money directly through some sort of raffle or donation desk this past Monday evening, but by giving a raw picturesque view on people’s living conditions, actually was the secret into unlocking or sparking interest (or luring them in to a cocktail party, then trapping them for an hour presentation with sushi, shrimp, celebrities and champagne).  Furthermore, just maybe, that interest could spread like a virus, but a good virus, for others to catch as well.  Once people caught this “bug” they would see that every little bit really does help and it’s the on lookers who sit back and say “someone else will do it so why should I?” are the ones who need to transform their thought processes.  The Global Poverty Project is already a large established organization around the world, but is new to the United States of America.  If you would like to get involved, please don’t hesitate to contact them directly via email at: enquiries@globalpovertyproject.com and tell them Hugh sent you. 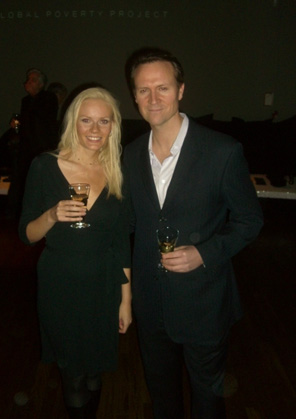