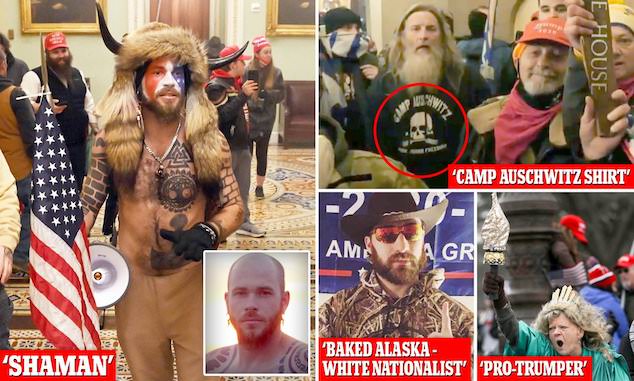 Capitol riot protesters arrested and sought as social media helps identity Trump supporters who stormed the Capitol. A who’s who.

Who are they and where are they? The FBI and DC Police have released photos of members of Trump’s MAGA supporters now wanted on federal charges for storming the US Capitol building after President Donald Trump urged them to ‘march’ on Congress to protest the results of the presidential election.

Authorities on Thursday announced they are now in the process of tracking down at least 36 suspects – in addition to the 68 already arrested – who scaled the Senate and House Chambers, ruined statues, fired tear gas and smashed buildings on Wednesday in chaotic scenes the dailymail reports.

The suspects, described as being part of a group of white supremacists, Holocaust deniers and conspiracy theorists, are wanted on a slew of charges including inciting a riot and weapons charges – and the Department of Justice has promised to bring them all before the courts.

Some of the assailants have already been identified through social media – such as the horned QAnon ‘Shaman’ Jake Angeli – see profile here and a MAGA fan whose marketing company fired him when they spotted his work lanyard around his neck – but the rest are wanted by law enforcement, and a huge manhunt has been launched across DC and the country.

The pictures taken throughout the nation’s capital were revealed at a press conference on Thursday as a growing number of politicians, including President-Elect Joe Biden and DC Mayor Muriel Bowser, have blamed Trump for the violent uprising.

The president, who has spent weeks falsely attacking the integrity of the election, had earlier urged his supporters to ‘fight like hell’ and protest Congress’ formal approval of the results in yet another failed attempt to stay in power.

As a sitting president, Trump cannot be charged with any crimes until he officially leaves office on January 20 when Biden is inaugurated, however authorities can still open a case and conduct an investigation.

But even if they choose to pursue legal action, details of such are unlikely to be announced in order to avoid Trump potentially pardoning himself and sparking a constitutional crisis.

The breach has raised questions from lawmakers on both sides of the political spectrum as to how law enforcement could allow a mob to occupy and vandalize the federal building.

Several members of Congress have since called for the 25th Amendment to be invoked so Trump is removed from office in the next two weeks while House Democrats have drawn up articles of impeachment.

Mayor Muriel Bowser on Thursday characterized the incident as ‘textbook terrorism’ and joined in the criticism of the police response.

‘Obviously it was a failure or you would not have had people enter the Capitol by breaking windows and terrorizing the members of Congress who were doing a very sacred requirement of their jobs,’ she said.

‘It didn’t just happen. There were people there that came to do it and generated it and caused this horrible mayhem,’ he said.

Coulson said it is likely the remaining suspects will be tracked down and charged soon, now that the FBI and Secret Service can identify them using their ‘good facial recognition ability’ on the photos.

‘The Department of Justice is committed to ensuring that those responsible for this attack on our Government and the rule of law face the full consequences of their actions under the law,’ Rosen said in a statement. ‘Some participants in yesterday’s violence will be charged today.’

Two men and two women died in the violent siege in Washington DC on Wednesday, including 35-year-old US Air Force veteran Ashli Babbit, who was shot dead by police after she tried to clamber through a barricaded entrance.

Another three victims died after suffering ‘medical emergencies’ related to the breach. They have been identified as Benjamin Phillips, 50, of Ringtown, Pennsylvania, Kevin Greason, 55, of Athens, Alabama, and Rosanne Boreland, 34, of Kennesaw, Georgia, DC Police Chief Robert Contee confirmed.

Further information regarding the nature of their deaths was not released.

A total of 68 people were arrested near the Capitol between Wednesday afternoon and early Thursday morning, with more expected to be charged as authorities continue to identify and search suspects, police said.

Of those arrests, five were related to unlawful firearm possession and two were for other prohibited weapons including metal knuckles and blackjack-like weapons.

The majority of arrests were related to curfew violations and unlawful entry, with 48 arrests made on US Capitol grounds. Only one of the suspected arrested is from the DC area, Contee said.

More than 50 Capitol and DC police were injured in the riot, including several who were hospitalized.

A 27-year-old Maryland woman, identified as Jessica Reinke, was arrested and charged with defacing public property and assaulting a police officer, according to police arrest records.

And only one person has been arrested on felony charges so far. The suspect, identified as Joshua Pruitt, 39, of DC, is charged with felony rioting, as well as unlawful entry and curfew violation.

Pruitt is reported to have ties to The Proud Boys, a white supremacist group that has been present at Trump rallies across the country in the past.

Christopher Alberts, from Maryland, was among the crowd of Trump supporters who stormed the Capitol building, an event which he called ‘the beginning of a revolution.’

The 33-year-old was later arrested and charged with carrying a pistol without a license and possessing a firearm on Capitol Grounds, among other charges.

Alberts had told the publication that he was attacked by police officers as he tried to enter the federal building.

‘The second I got to the tops of the steps they f**king baton my leg. They freaking rubber-bulleted by arm,’ he said.

A list of arrests released by the police department Thursday did not include several suspects identified as participants on social media, including ‘QAnon Shaman’ Jake Angeli or Richard ‘Bigo’ Barnett, who broke into House Speaker Nancy Pelosi’s desk and took a piece of her mail.

Dozens of those involved in the violent siege, labeled as ‘great patriots’ by the president are yet to be identified and the FBI is now asking for the helping in finding them, tweeting they are ‘accepting tips & digital media depicting rioting & violence in the U.S. Capitol Building & surrounding area on January 6, 2021.’

Most of those already arrested have been accused of curfew violations. Others face charges of carrying a pistol without a license.

The former Deputy Director of the FBI, Andrew McCabe, has said the bureau must make ‘identifying, arresting, and prosecuting every single person that you possibly can that entered that Capitol building yesterday’ a top priority.

Lawmakers from both parties have pledged to investigate law enforcement’s actions and questioned whether a lack of preparedness allowed a mob to occupy and vandalize the building.

Welcome to a divided polarized America ….