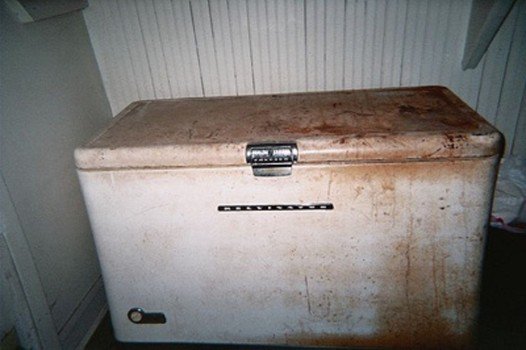 Mitchelle Blair since come to be known as the Detroit freezer mother was today sentenced to life in jail without parole after murdering two of her four children and stuffing their bodies in a home freezer.

Mitchelle Blair pleads guilty: ‘They were demons who deserved it’

During trial proceedings, Goldfarb told how Blair had poured scalding water on her victims, beat them with sticks and put trash bags over their heads.

Asked Judge Dana Hathaway: ‘So this was your way of inflicting punishment?’

‘I don’t regret none of this. … I don’t feel no remorse for the death of them demons,‘ she said.

The mother underlined that sentiment at her sentencing hearing.

‘As horrendous as everybody thinks I am — that’s fine,’ Blair told Hathaway.

In deliberating her sentence today, Judge Hathaway admonished the mother for failing to protect her children and for having failed to make ‘adult decisions’ regardless of what Blair herself may have been subjected to growing up.

‘There’s nothing that can be done, at this point, to change what happened,‘ Hathaway said.

In a statement to the court pursuant to her sentencing, addressing one of the surviving children’s fathers, Alexander Dorsy, whom now seeks custody of his child, Blair told how her child had not seen her father since 2006.

Friends and neighbors said they didn’t know there was trouble in the home and rarely saw Blair’s four children. Two surviving children, ages 17 and 8, have been placed with an aunt as pending custody actions are deliberated.