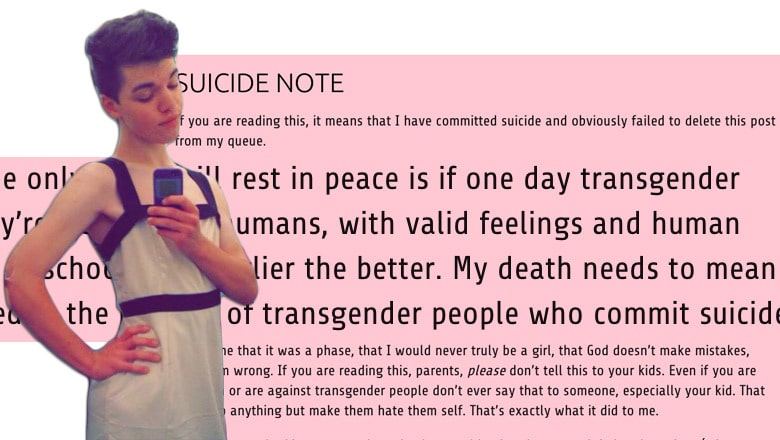 Leelah Alcorn a transgender teen hours before taking their life by walking in front of a tractor trailer in Ohio would write a letter blaming her religious parents for her imminent suicide.

The 17 year old transgender teens suicide would come in the early hours of Sunday on highway I-71 in Warren County, a few miles from her family home.

Riley Matthew Moscatel, transgender teen kills self after coming out as male

Sunnie Kahle religious school: Of course she’s not a lesbian or transgender but…

Transgender teenage couple in love. He used to be a her and her a he…

Transgender nursing student threatened with expulsion if she keeps using the woman’s bathroom.

Swedish law demands that transgender people undergo sterilization if they seek to legally update their gender.

In a note addressing her imminent suicide, Leelah Alcorn accused her devout Christian parents of refusing to acknowledge her gender and forbidding her from transitioning.

The teen’s suicide note would subsequently land on Leelah’s tumblr account, Satan’s Wifey after being scheduled by the teen prior to her imminent death.

Begins the suicide note: ‘If you are reading this, it means that I have committed suicide and obviously failed to delete this post from my queue.’

Leelah, from Kings Mill, Ohio, writes that although she was born a boy, she began identifying as a girl at the age of four.

‘When I was 14, I learned what transgender meant and cried of happiness. After 10 years of confusion I finally understood who I was.

‘I immediately told my mom, and she reacted extremely negatively, telling me that it was a phase, that I would never truly be a girl, that God doesn’t make mistakes, that I am wrong.’ 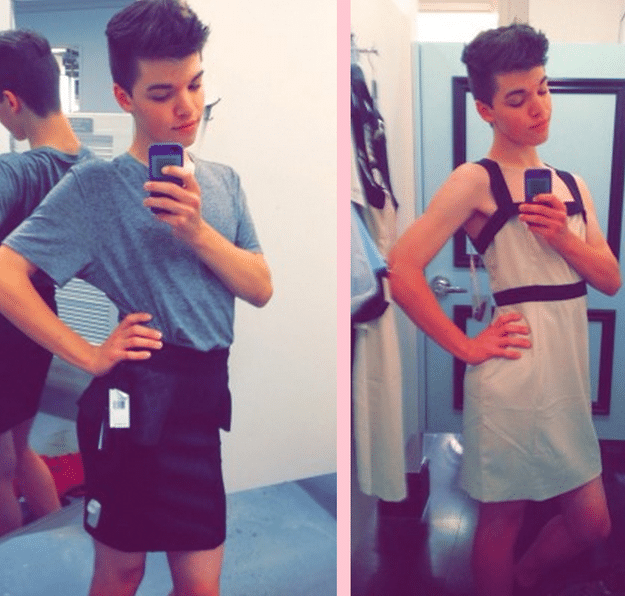 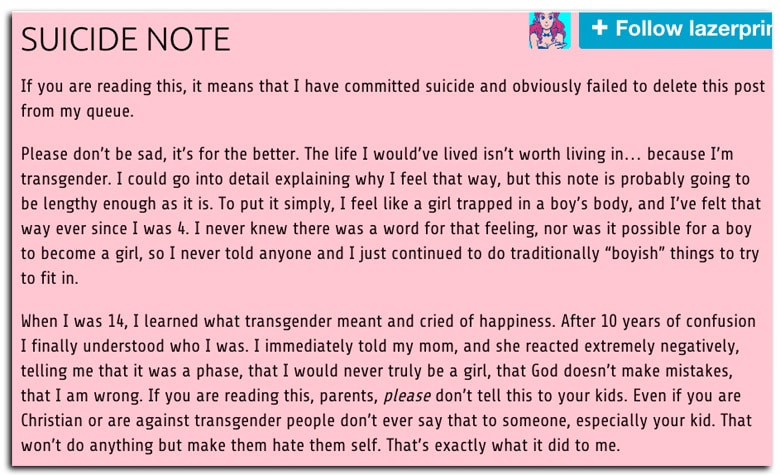 In her note Leelah reveals that her parents refused to allow her to transition and instead took her to ‘Christian therapists’ who told her that she was ‘selfish and wrong’.

‘I formed a sort of a “f*** you” attitude towards my parents and came out as gay at school, thinking that maybe if I eased into coming out as trans it would be less of a shock.

‘Although the reaction from my friends was positive, my parents were pissed. They felt like I was attacking their image, and that I was an embarrassment to them.

‘They wanted me to be their perfect little straight Christian boy, and that’s obviously not what I wanted.’

‘On my 16th birthday, when I didn’t receive consent from my parents to start transitioning, I cried myself to sleep.’

Leelah’s mother Carla Wood Alcorn would also post a tribute to her child on Facebook, but referred to Leelah as her ‘son’, used her birth name, and made no mention of a suicide.

The disregard for Leelah’s wishes to be identified as a girl has angered many in the LGBT community, and a Facebook group calling for Justice for Leelah Alcorn has been set up.

The death of Leelah has also since led to the transgender community calling for a bill outlawing conversion therapy.

Writes transviolentracker.org: It is well known that trying to erase, delegitimize or force a person into a false gender identity can severely harm the individual and ultimately lead to death. Leelah was subjected to a life threatening practice by her parents that combined with erasure and suppression of her gender identity ultimately caused her death. At no time should a transgender person ever be subjected to psychological brainwashing tactics based on religious beliefs. The utilization of religious based ‘transgender conversion therapy’ is an atrocity against our youth and needs to be banned in all 50 states.

In honor of Leelah Alcorn, we call for the immediate creation of a national effort to bring about Leelah’s Law that will ban ‘conversion therapy’ against transgender, gay, lesbian and bisexual youth.

Interestingly on Monday evening, another queued post from Leelah appeared on her Tumblr, titled “SORRY,” in which she issued a series of apologies to friends and family. But to her mother and father, she wrote, “Fuck you. You can’t just control other people like that.”

And now for my sorry notes to some people I knew…

Amanda: You are going to have such a wonderful life. You are the most talented and pretty little girl I’ve ever met and I love you so much, Amanda. Please don’t be sad. I’m going to miss you so very much. I love you.

Tiffany: We haven’t talked much recently since we’re both so busy but I’m so happy you’re my sister. You are so courageous and determined to achieve what you want, you can accomplish anything. I love you.

Justin: We’ve been jerks to each other a lot recently but I really do love you. You get on my nerves almost all the time but no matter what a part of me will always love you. Sorry for picking on you so much when we were kids.

Rylan: I’m so sorry I’m never there for you. I love you so much.

Abby: Thank you for dealing with my pathetic problems, all I did was make your life harder and I’m sorry.

Mom and Dad: Fuck you. You can’t just control other people like that. That’s messed up.

I don’t really feel the need to apologize to anyone else… odds are you didn’t give a shit about me and if you do, you did something that made me feel like shit and you don’t deserve an apology.

Also, anyone who says something like “I wish I got to know him better” or “I wish I treated him better” gets a punch in the nose. 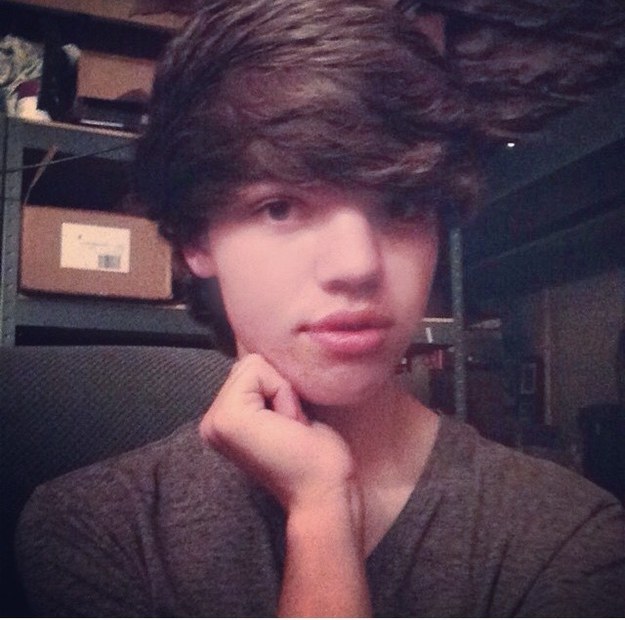 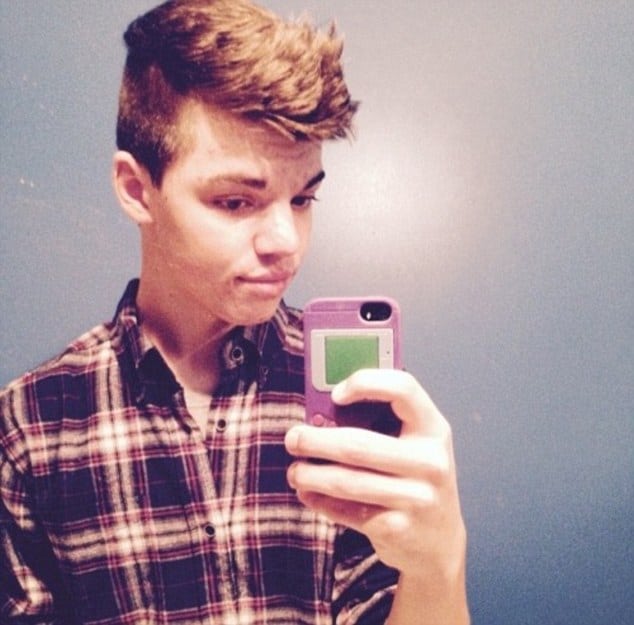 How many young people are going to have to die before we as a society accept that being transgender is biological, not a sin, and not a problem? The same goes for being gay. This is incredibly sad, and my heart goes out to her family and friends.

As long as the media keeps treating it as a noble statement, and not the senseless tragedy that it is, teens are going to keep killing themselves as an attempt to resolve their problems.

It doesn’t resolve anything,

One of the biggest barriers to people asking for help is stigma, especially feeling that they are alone and isolated. I’ve been on both sides of the suicide coin and neither side is fun. Nobody should ever feel so awful or get to a point where they feel that taking their lives is the answer.

What makes more sense? Dealing with problems, resolving them, and LIVING to make a change in the world? Or putting a bullet in your head to “make a statement”?

It takes time. It, unfortunately takes losses and grief and pushing out the old ways of thinking with the new. It does not make a woman disgusting for believing what she believes. She’s a mother! And she was likely told her child was accidentally hit by the truck because its still under investigation and they probably did not know about the suicide notes. And her child had the anatomy of a BOY so regardless of how he/she felt about herself, to that mother… for the last 17 years… that’s her son.