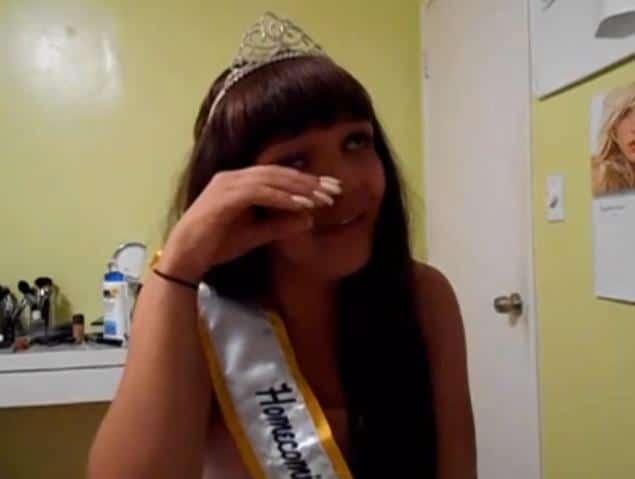 Transgender Homecoming Queen, Cassidy Lynn Campbell (born Lance Campbell) has gone on to tell in a newly released youtube video that she has become the target of bullies since becoming homecoming queen at her high school, Marina High in Huntington Beach, California last week.

Tells the beleaguered teen who at present is struggling with her ambition of becoming a spokesperson for similarly affected individuals: “I don’t understand why people have to be so ignorant and don’t understand,”

“I am a girl and I’ve always felt like a girl ever since I was a baby.”

“I’m so sad, I’m so distraught and so broken down and so upset and so deteriorated and so tired of the world.  And I know I need to be strong for the kids that I did this for and people I did this for, but I can’t right now.”

At another point the 16 year old goes on to tell:

“I can never have something good happen to me and people just be happy for me — never,”

“I’m always judged and I’m always looked down upon … sometimes I wonder if it’s even worth it and if I should just go back to being miserable.”

The clip was uploaded a day after Campbell had won the crown. “I instantly just dropped to the ground and started crying,” she told KTLA at the time.

At another point the teen makes the following statement during her emotional youtube video.

“I realized it wasn’t for me anymore and I was doing this for so many people all around the county and the state and possibly the world and I am so proud to win this not just for me, but everyone out there.”

“Sometime I wonder is it even worth it, and if I should go back to being miserable and be a boy and hate myself and hate my life, just so everyone can just shut up and leave me alone.”

And then there these comments on the web that made me wonder as well:

It’s coming to something when people feel the need to make a YouTube video of such a private moment. I support the LGBT community but I can’t support this kid taking to social media in this way. It seems narcissistic and self indulgent, a problem I feel is prevalent in many teens these days not just transgender home coming queens.

So you think she should have suffered alone and not share her anguish caused by unimportant strangers? Would that make your narcissistic feelings better? Because it’s all about how you feel?

Cassidy, n\No, people should not be mean to you but you have to remember, what you are going through is something that most people don’t encounter during their life. Of course they’re going to think it’s strange. And if you think you’re the only young person who has gone home and cried because of what their peers from school did or said to them, then think again. I’m not trying to bash you at all. What I’m trying to say is that the world is cruel to everybody in some way, shape or form. How you handle it is what defines you as a person. Hold your head up and let them know that you’re stronger than they are and what they think will not hurt you. Obviously you have a lot more people that like you than dislike you because you won homecoming queen – congrats by the way 🙂

Hopefully, someday science will be better able to explain and treat these gender mixups. In the meantime, people should forbear to be cruel to these unfortunate cases.

It is such a shame that the ignorance of the uneducated people in this world comes out when trans women like you come into the spot light. Those people consider us less than human, and take an instant dislike to us because we were born different in their minds and that makes it okay to bully, assault and murder us.

I really can’t stand behind some of the things she says in her video, since they reinforce negative stereotypes of transwomen, which I found rather hurtful and depressing. It’s hardly her fault for accepting those assumptions at face value, though. The media portrays us (transwomen) as freaks – among other things, consistently misgendering and misnaming us, focusing on pre-transition aspects of our existence. At best we’re barely accepted even if we conform to ‘passing’ standards and a normative trans narrative (which often parallels outdated medical gatekeeping models) like looking femme, knowing we’re trans since a young age.

That’s the environment both her and the jerks harshing on her are raised in: a cisnormative environment where trans women are consistently othered and/or erased. And meanwhile, the YouTube comments misgendering her continue to roll in, so I realize this might be seen as mean, but this whole saga bums me out so much. I know it’s not about my feelings, but I do think what I’m trying to say is worthwhile. I’m not just concern trolling here, I just think this stuff should be pointed out.