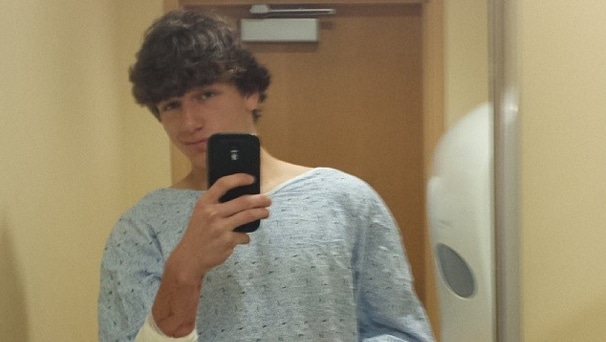 Since Nate Scimio, a student at  Franklin Regional High School where a 16 year old sophomore student, Alex Hribio went about indiscriminately stabbing fellow students, posted a selfie of himself recovering at the hospital after helping bringing Hribio’s apprehension, Nate Scimio has found himself being widely condemned. Widely condemned by the very vehicle he chose to share his almost too unbelievable and lucky still to be alive moment with- social media.

At first, twitter and instagram (@nate_scimio on instagram) were in unison with the young man who had lunged between Alex Hrbio and a female student that Hrbio was motioning for. At the time he would stave off the assailant as he sounded off the alarms, helping alert authorities and fellow classmates as to the danger at the school.

Nevertheless some social media users were somehow turned off that a young man had taken to posting an image/selfie of the event, of the dire straits consequences of being involved in a life or death situation. Some thought it was out of place, spoke of a misguided vanity or ego of Nate Scimio (the self congratulating grin and acknowledgement that he’s the shit had me ruefully smiling for hours long after it first came out).

Sad that survivors need to take “I survived “selfie photos just to attend high school these days! Speedy recovery all around for you and your classmates Nate.

Why is this kid being hailed a hero for pulling the fire alarm? If the attacker had a gun and the fire alarm brought everyone into the hallway, they would have all been targets. He should have run out and called 911.

One thing I’ve learned over the years — it is impossible to underestimate the depths to which the so called “millennials” will sink. Every time I think someone couldn’t possibly do something any stupider than the before I find myself staring at something like this.

Yet to be fair to Nate Scimio, let’s remember, he wasn’t a passerby, a witness casually taking a picture of some chaos where he was far removed from, where he had chosen to take a sharable moment as opposed to help with circumstances at hand. Nate Scimio was the victim himself, was at that very moment fighting for life and death, not just for himself but that of fellow classmates and teachers. To suggest that a hero who stars and slays his own demons ought not record his honorable moment is to deny that hero his wider acknowledgement.

And that in a cusp is what social media has allowed for better or worse, the wider acknowledgment, participation of a situation, a dialogue that was once out of reach for most of us. By virtue of posting the hero selfie, Nate Scimio reminded us that he was a teenager craving attention on one hand, but more importantly reminding us and himself that he was a hero who could have lost his life in defending that of others. A moment that Nate Scimio can reflect on for years to come now that he has a hard copy candid camera moment of it floating on the web. 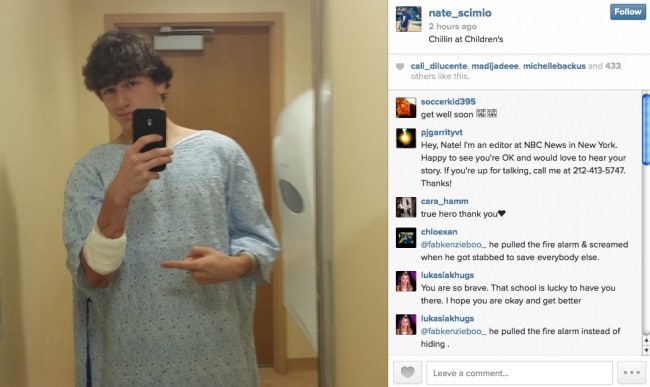