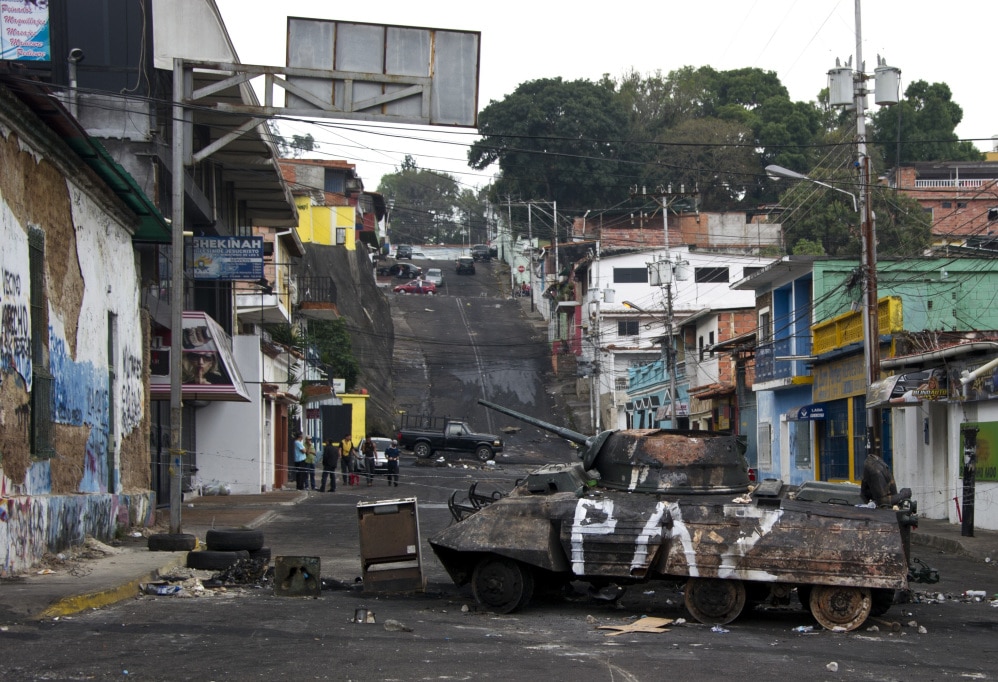 As Venezuelan protestors continue to hold daily demonstrations arguing their case for socio economic reform, questions are being asked as to how Venezuela’s opposition party, once a denizen of elites conflating to preserve favors and equanimity for the privileged few came to join the fight with commoners?

According to some reports, the sudden taking up of concern for the common Venezuelan is at best a cynical guise as to which ferment anti government hubris and force out the democratically elected government of President Nicholas Maduro.

Reflects axisoflogic: Failing to win any of Venezuelas elections by earning a popular mandate from the majority of the population in the last few years, the leaders of the mainstream opposition are now resorting to colour revolution tactics and a Ukraine-style disruption strategy. The aim of these opposition leaders in Venezuela is to manipulate the galvanized anti-government protesters into creating a political crisis in Caracas. Mainstream opposition leaders are doing this by instigating the protesters into taking steps that are geared at toppling the Venezuelan government.

So what may appear to us here in the US as an honest attempt to address widespread economic malaise, rampant crime and the shortage of basic items caused by the perpetuation of ineffective foreign currency reserves one has to wonder if the recent calls to oust Maduro has more to do with Venezuela’s opposition party who has a history of doing little to thwart economic inequity (until Hugo Chavez first came into power and began to force certain changes that saw the general well being of the downtrodden remarkably change in decades) than simply getting back in power so as to reverse the changes that Chavez had inserted.

Reflects further axisoflogic: It is ironic that many of those opposing the Venezuelan government in the name of democracy, equality, and security were once supporters of autocratic and openly corrupt governments before the Chavez era. Memory loss or outright hypocrisy is at play. When the same oligarchs that form and finance the Venezuelan opposition that is supporting and instigating the current anti-government protests were in charge of Venezuela, corruption was widespread, poverty rates were much higher, inequality was greater, and there was much higher inflation. Nor was Venezuela even a functioning democracy.

Which then forces the question, if we are to understand that Maduro has been legally elected (despite frequent calls by the opposition who have insisted that he cheated) then why is a legally elected leader resorting to violence and the clampdown of media?

Reflects further axis logic: Furthermore, it must be understood that the Venezuelan opposition, in the first instance, owns almost all the mainstream media in Venezuela. The Venezuelan opposition literally has a choke-hold on most the news whereas the government only owns public television, receives support from community-based radio stations, and is allowed by law to get all the networks in Venezuela to release important public messages. In this context, the opposition leadership has used its control over the media to paint a false image of the events on the ground and to heavily distort the image of the Venezuelan anti-government protests in the minds of its grassroots followers and to whitewash the riots and acts of vandalism that have also taken place in parallel to the protests

Yet what about the reported firing of bullets into unarmed protestors at the behest of pro government snipers?

That too tell observers has been a manufactured byline by Opposition forces who have injected dissident gangs to perpetrate violence which has forced the government’s hand in trying to stem what may be legitimate protests versus that of criminal elements.

Tells the outlet again: Doctored images and false stories are being used by mainstream opposition supporters to depict the Venezuelan government as an authoritarian regime that is using brutal violence against unarmed civilian protesters. Unflattering pictures of Argentine, Brazilian, Bulgarian, Chilean, Egyptian, Greek, and Singaporean police and military forces in crowd control mode and anti-protest operations have been circulated and passed around through mass communication and social media by Venezuelan opposition forces as actions taking place in Venezuela during February 2014.

But what about Maduro’s move to eject CNN reporters? Surely if he has nothing to hide he ought to be open to foreign media coverage?

That too may be a naive argument as media has historically been used to manipulate public opinion, the invasion Iraq forces pursuant to the Kuwait crises by the US, where it was shown that what was what really at stake was US entrenched interests rather than the upholding of democratic principles in a region that does not generally follow democratic principles but rather authoritative measures. The same could be said of the US’s invasion of Iraq in 2002 on the insistence of weapons of mass destruction, only for the media to report a year later after unabashedly supporting the assault that no such weapons existed.

In some sense latin America is used to all of this and has seen itself since the 1970’s the continual ideological playground that has allowed the historical subversion of democratically elected governments in the Dominican Republic, Chile, Peru, Argentina, Brazil, Bolivia, Nicaragua, Haiti, Guatemala, Panama, Cuba and Honduras.

Perhaps given the historical circumstances of American meddling and covert action that the President Maduro ought to be rightly suspicious of US media whose owners, are firmly entrenched in preserving the elite status quo that exists in the US and by extension the hopeful return of such in the Venezuela.

Which is to say, Maduro would probably not mind a fair telling (but that too is naive to imagine given many of his own faux pas and catastrophic economic blunders and buying off of political support to stay in power as well as his own autocratic policies)  of what is actually going on but at this stage of the game is too cognizant of the power of  entrenched media, both locally and internationally to sully his cause.

And while Maduro ironically insists that it is fascist imperatives that seek to unsettle the nation, an honest appraisal of his government shows he is not necessarily the angel he would like to believe he is. Far from it.

Reflected the dailybeast in October of 2013, just a few short months before the current crisis:

Though Venezuela still has plenty of oil, the haul of petrodollars can hardly keep pace with capital flight, as middle-class and rich Venezuelans hurry to take their savings abroad ahead of what they assume will be an imminent crash. No wonder the greenback has spiked on the black market, now fetching on the streets a record six times the official exchange rate.

It’s no mystery what Venezuela must do to reverse the crisis. Economists say the government must devalue the enfeebled currency— ironically called the bolivar fuerte (the strong bolivar)—and lift the Soviet-style market controls that are emptying supermarket shelves and chasing away investors. Without predictable rules for doing business, there will be even fewer takers for Venezuela’s high-risk government bonds.

“It’s going to take a policy shock to stabilize the economy, but that requires a degree of consensus and with a bitter and polarized political environment, frankly we don’t if that exists,” says Ramos. Failing that, he adds, “We are on the brink of an emerging market crisis, with a run on currency, a banking crisis, and an imploding economy.”

Some have argued (corporate media) that the leader has squandered investment money given to him by his allies, initially in the guise of further increased production of oil to that of paying political allies to stay in power as well as by choosing to use the spoils of oil production subsidizing citizen’s cost of oil.

Yet an honest appraisal ought to take into account of the fact that much of the money made has instead of lining up the pockets of the elite has been reinvested back in society under the guise of health and education, as well as providing  free clinics-which have helped make enormous and real reductions in absolute poverty.

Since the Chávez government got control over the national oil industry, poverty has been cut by half, and extreme poverty by 70 percent. College enrollment has more than doubled, millions of people have access to health care for the first time and the number of people eligible for public pensions has quadrupled.

Nevertheless Venezuela’s attempt to be more socially inclusive and its failure to efficiently re invest in the oil industry (which has a lot to do with creating a culture that make investors feel safe) has led to the absurd situation of Maduro’s socialist government paying the interest off alone on one of its biggest creditors, China, who has loaned Venezuela $50 billion since 2007) with 300 K barrels of crude oil a day whilst only producing 2.5 million barrels a day, of which after national consumption and other guaranteed provisions is left with 1.4 millions barrels to export.

Similarly Argentina, Russia, and even Cuba have been reluctant to extend themselves financially to Maduro as the track record of paying investors has been compromised, thus stonewalling any ramp up in the production of crude old which would help Maduro get out of the economic quagmire that Venezuela finds itself. Principally pay off debts and buffer foreign currency reserves which have fallen from $30 billion at the end of 2012 to $20 billion at present.

Which raises the question, if Maduro was overthrown could we imagine a revamp in the investment of production of crude oil with the assistance of US interests with Venezuela’s elite who would stand to greatly benefit with such an alliance?

Certainly a greater production of oil would help the nation but one wonders if that too will necessarily translate into a more equitable distribution of the spoils of production (not that $50 billion in revenue is necessarily enough for 40 million people to live off)  say the way an egalitarian nation like Norway has managed to achieve? Or can we argue that socialism simply doesn’t?

Either way, Venezuelan’s opposition party has been closely paying attention to the challenges of Maduro’s government as it ought to, even instigating some below the belt tactics of its own, with the help of the US government.

One can be sure that if Maduro can be pushed out of the way, there are lots of hand shake deals waiting courtesy of US interests who are watching the current fracas for their chance to make a killing…