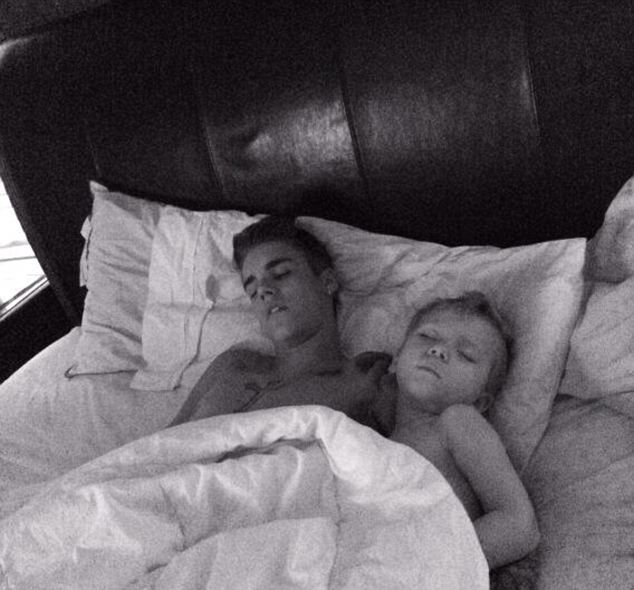 Kids, Justin Bieber is sound asleep and so should you be. Not a care in the world. Not a camera man for miles to see. Not a sliver of tequila dribbling down his chin.  Nothing to fear. Millions in the bank. Billions of fans. Dad Jeremy posting images of me sleeping with my little brother on the web. Sleeping soundly cause I don’t give a shit about the Justin Bieber Toronto charges the world reckons I am guilty of…

As the world dizzily braces itself to find out how Biebs will fare over pending assault charges in relation to a cab driver in Toronto and a looming Justin Bieber deportation petition, his dad Jeremy Bieber was up to other kindred things.

For those who recall, kindred dad Jeremy was also present when Biebs was arrested last week. At the time, he and Biebs took to continued partying despite Bieb’s management team, Scooter Braun and co begging our collective media hero to hurry back home under the cover of angel scented satin bedsheets. It was not to be. It was only after Bieb’s keeper Usher flew down to Panama where Biebs and his new love interest Caligua were holidaying that Biebs put away the tequila shots and Lamborghini headed back home with dad Jeremy.

In the latest merry go round that is Bieb’s fantastic life, our collective tabloid hero along with five of his entourage are accused of assaulting a limousine driver on December 30 after they were picked up from a nightclub.

Toronto cops released a statement saying the limo driver and an unnamed passenger had an altercation during which he was hit on the back of the head ‘several times’.

‘The Toronto Police Service requested that Justin Bieber appear in Toronto today to face an allegation of assault relating to an incident on December 29, 2013.

‘We anticipate that this matter will be treated as a summary offense, the equivalent of a misdemeanor in the United States.

‘Our position is the Mr. Bieber is innocent. As the matter is now before the Court, it would be inappropriate to address the specifics of either the allegation or of our defense at this time.’

Innocent or not. It seems fans and the public at large have had enough of a once seemingly docile angelic music sensation who over the last two years has seen his mecca rising to the stratosphere while descending into the pantheon of hell behavior wise. Hardly the endorsement of ‘thanks for your money folks’ that fans may have held for the idol who many wonder has gone way past the welcome to our life boudoir.

Did you sign the Justin Bieber deportation petition? Exodus of a legend?