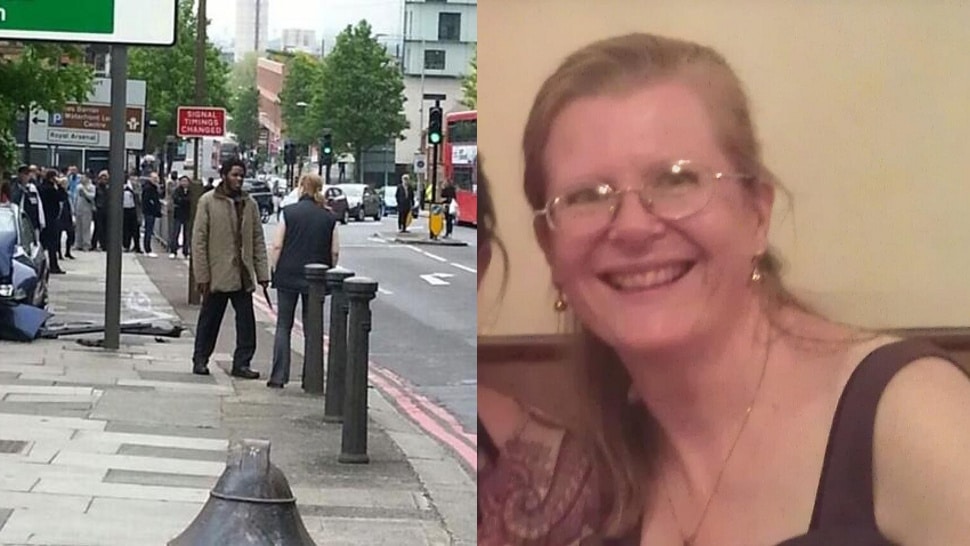 Ingrid Loyau-Kennett, a 48 year old mother mother-of-two from Cornwall is being credited today with calming down the men responsible for the hacking yesterday of a London soldier.

A photo making the rounds earlier showed Loyau-Kennett confronting one of the two attackers in the immediate aftermath of the gruesome beheading of a British solider, believed to be motivated by religious extremism.

Speaking with the Daily Telegraph, Loyau-Kennett described jumping off a bus in order to attend to the soldier’s wounds.

“And then when I went up there was this black guy with a revolver and a kitchen knife, he had what looked like butcher’s tools and he had a little axe, to cut the bones, and two large knives and he said ‘move off the body,” she said. “So I thought ‘OK, I don’t know what is going on here’ and he was covered with blood. I thought I had better start talking to him before he starts attacking somebody else. I thought these people usually have a message so I said ‘what do you want?'”

Commentators on the web have since gone on to praise Ingrid Loyau-Kennett for her valor and resolve. Others on the web have even gone on to say that instead of passively watching on (or worse taking pictures of the mayhem) Loyau-Kennett has gone on to take a pro active stance and in her own way as a citizen attempted to take on the issues that have galvanized Western states and that of the UK, in turn inspiring a wider collective.

Tells thedailybeast perceptively: What they wanted was “to start a war in London tonight,” one of them told her. But what they really wanted was even simpler than that. They wanted to be feared.  And that is precisely what Loyau-Kennett, at least outwardly, would not grant them.

Prime Minister David Cameron today paid tribute to Mrs Loyau-Kennett in a statement outside Number 10, and said: ‘She spoke for all of us’.

‘Confronting extremism is a job for us all. And the fact that our communities will unite in doing this was vividly demonstrated by the brave cub pack leader – Ingrid Loyau-Kennett,’ he said.

‘When told by the attacker that he wanted to start a war in London she replied “You’re going to lose. It’s only you versus many.” She spoke for us all.’

Perhaps what makes Loyau-Kennet’s effort even that more heroic is her no nonsense approach and simple desire to come to terms with the issues and mayhem at hand. A point of view and reference that many wonder why national governments are on many levels failing to do, then again is it any wonder when most states are beholden to power regimes and vested interests that many issues are never resolved and if anything aggravated? How sad and in some way bitter sweet that it took A 48-year-old Cub Scout leader to placate the festering tensions of our times…

“This is courage of the highest order,” he said. “It sounds as if these members of the public are not soldiers, not policemen, not people whose duties demand this, they are extremely courageous people and that courage deserves to be recognised at the highest level.”

And then there were these comments on the web that caught my attention as well:

A once proud British people who ruled the world now reduced  by Socialism into a race of helpless Sheep unable to confront pure evil on their own. Passively standing around waiting to be slaughtered by one or two men with knifes who just beheaded one of their precious children. This is the epitome of Orwellian Socialism the reduction of men with free will into passive beasts of burden for The State.

My God how frightening this is, and don’t for a minute think this video isnt being passed around the Islamic world for their amusement, to laugh at our cowardice as one of theirs slaughters one of ours.

They are thinking how easy it will be to force our way upon these people.

A woman confronting these men was safer than a man doing it. I’m pretty sure they would have killed a man straight away. All the same this lady is very brave.

Why did it take over 20 minutes for any police to arrive.

These guys seemed determined.  The red blood on his black hands is visually captivating. If he wanted to make a statement he sure did. Also, please stop with this nonsense that this woman is brave. She ‘s just foolish. By looking at her body language she looked as if she was begging for her life.

These are those rare moral moments,Do we get envolvd?and While these criminals use Muslim religion,the war on infidels and the justification to slaughter  US, exist.

Since when does Britain have cub scouts? Also, if this had happened in the US, the two black dudes would have been shot a least 200 times before being taken into custody in a body bag..