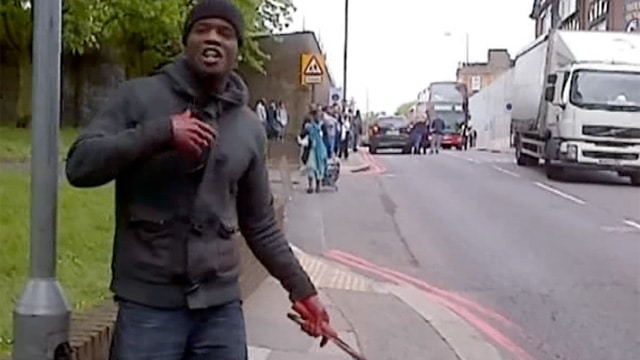 In trying to get a sense of what propelled yesterday’s London hacking, the web has been awash with theories and postulations as to what could have been the igniting trigger. But perhaps the one idea that suddenly grabbed homage as to why Michael Adebolajo the 28 year old Muslim convert turned to his fiery violence comes below courtesy of a random commentator on the web that this author came across.

Yes it may come down to politics, revenge or feelings of slight and retribution but more often it sometimes comes down to a misguided sense of narcissism or does it? See what you think…

A proper understanding of the actions of the Woolwich attackers may not be in terms of politics but in terms of a particular psychopathology narcissism. While Tsarnaev, Atta and Merah are Islamist jihadis, another was a scourge of Muslims – Anders Breivik. The Norwegian was found not be psychotic but to have narcissistic personality disorder.

The narcissistic pattern goes like this. Some recent experience of humiliation is followed by a time of brooding and ineffectual rage. A few months of isolation includes a break with the mosque and reliance on Salafi literal interpretation of the Qur’an. The idea of “shahid” witness through self-sacrifice – includes the idea that the faithful will admire his acts, giving the recognition that he craves. Vagueness of the target is typical of the eventual outburst of rage.

TamerlanTsarnaev’s brooding sense of humiliation increased when his aspiration to box for the USA was crushed by a change in the nationality requirements. This diminution of self was followed by a desire to increase his perceived worth by commanding awe from his audience: his February 12th tweet was “Do I look like that much of a softy … little do these dogs know they’re barking at a lion”, and in March: “never underestimate the rebel with a cause”. Why did he choose to blow up random people in Boston? It is extremely difficult to see any achievable political goal, such as Chechen independence in this. His anger was directed at Americans around him. He tweeted: “I don’t understand Americans, don’t have any American friends” and “there are no values anymore. People can’t control themselves”.

Mohammed Atta flew a plane into the twin towers believing he was hurling himself against the centre of the worldwide Jewish conspiracy. His Saudi fellow conspirators thought they were attacking “The Great Satan”. They thought they would be shahid in the eyes of an adoring audience. They imagined being transported straight to paradise, bypassing the interrogating angels Munkar and Nakir and the possibility of going to Hell.

Mohammed Merah died in a shootout with police in March 2012 after killing seven people on a gun rampage in Toulouse in France. Merah had reportedly split from his wife days before the shootings. He admitted antisemitic motivations, and said he attacked the Jewish school because “The Jews kill our brothers and sisters in Palestine.” He turned to Salafism in prison and his radicalization increased after two journeys he made to Afghanistan and Pakistan.

These beliefs have little to do with achievable political goals, but everything to do with narcissism. We predict that Michael Adebolajo will have a similar biography.