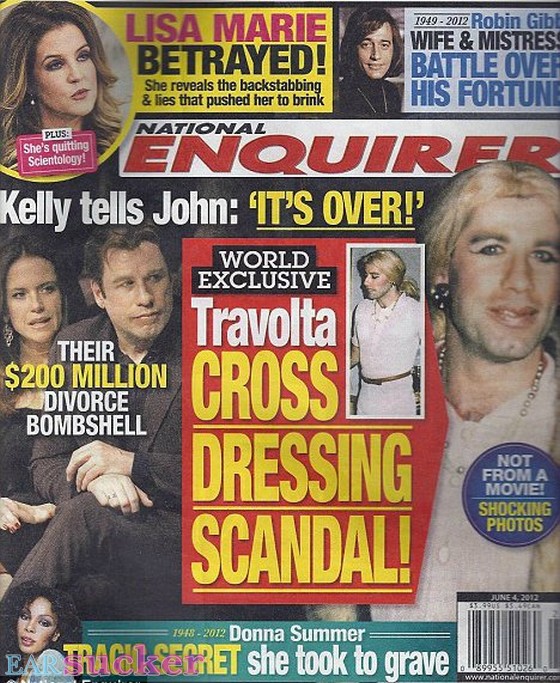 John Travolta likes to dress up in a dress in his spare time and the world is jealous of the bixch.

Kids, here comes the latest chapter in the never ending drama called ‘I like the shit raw and well hung,’ starring of course John I can never get enough flattery Travolta.

So what’s good in John’s world now? Well the above picture of the bixch dressed as your aunty Coco Divine on the way to a hot and heavy ball with the guy she met on some anonymous dating site for the uninhibited. As you can see that blonde wig does wonders for all those missing hair follicles that John has been having to deal with all those years and personally I do think that blush and chocolate coated (don’t ask) lipstick does wonders in exaggerating John’s baby blues and those lips that just beg you ‘I’d blow you for a margarita anyday….’

But who’s not happy with this shit is John’s wife, Kelly Preston. After god knows how many cabana boys have being coming out of the latrine flagellated at the mercy of good old John, Kelly can no longer be expected to hold her head high in society. So of course the bixch is started rumors that she moved out and is even seeking a divorce from our local hero. Please Kelly don’t divorce John. Just get even. Just hire your own private flotilla of private masseurs. John will be watching from the other room girl…

Isn’t it time you made it on the cover of the National Enquirer too?

John Travolta threatens to counter sue masseur who claims Travolta tried to have gay sex with him.

John Travolta gets caught without his hairpiece.

The secret gay life of John Travolta will soon be on your bookshelf.