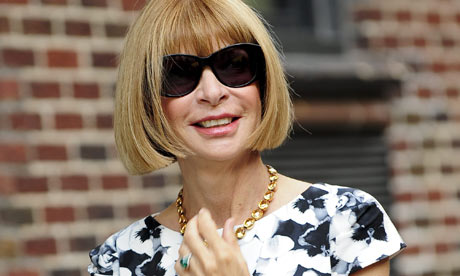 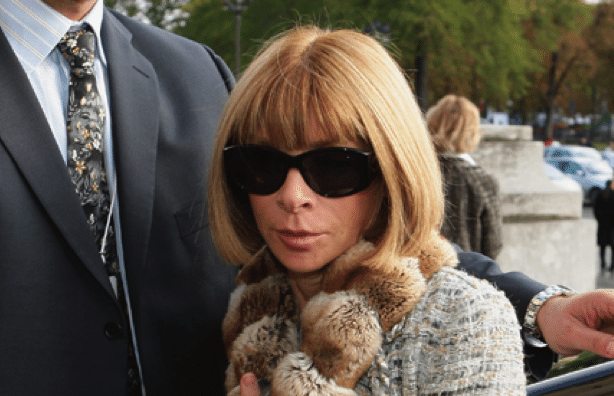 Oh dear, I do have to confess kids, while you and the rest of middle America were zapping your eyeballs on pigskin being thrown on a paddock I on the other hand was nestled under the covers listening to the doyen of fashion herself, Anna Wintour, once again dispel myths about her persona and why supposedly so many out there think she’s a cold hearted bixch.

It may have been an awkward timing of schedule between 60 minutes interview with Anna Wintour and that of the Superbowl, but any fashionista worth their salt always understood ultimately what Anna had to say would always take precedence. Until that is we all worked out it was a rehashing of a previously televised interview in 2009. Oh well…one can never get enough of a good interview.

Taking a cue from huffpo: When asked if the perceptions of her icy demeanor and bitchy attitude are true, Anna replied, “Well we’re here to work,” i.e. not to be best friends. “If one comes across sometimes as being cold or brusque its simply because I’m striving for the best.”

Indeed Anna, we’re all here to work, but of course there’s only enough room at the top for some of us. The rest I am afraid must look indignantly and wonder what it is that they possibly lack that keeps them from attaining the mantle of America’s Queen of Fashion. Never mind that that Queen happens to be English.

Grace Coddington and Andre Leon Talley were on hand to confirm that their boss is, indeed, quite intimidating and that she creates that air of intimidation with her cavernous office, her cold personality and even her mysterious sunglasses.

Oh poor Anna, must you suffer these fools all by yourself? Unlike you dear, I know I will be resigned to my rightful place second or if the designer is a real bixch, third row this upcoming week at the NY collections but never mind. Were all in this together and if you promise to throw me a crumb Anna I’ll trade you gossip secrets if you trade me secrets on how you maintain that wooly cold exterior of yours that the world over has come to affectionately adore. At times…

Don’t you wish you were a fashion bon vivant too, unless of course you already are. Hawt bixches….

Azzedine Alaia a standout success in his comeback show while Anna Wintour boycotts the star designer.

MARC JACOBS IS AWARDED THE FIAF TROPHEE DES ARTS PRIZE AT THE PLAZA.

ANNA WINTOUR WANTS TO REMIND YOU WHY SHE’S STILL BETTER THAN YOU.

WILL ANNA WINTOUR AND HAMISH BOWLES EVER FORGIVE FASHION BLOGGERS?

ANNA WINTOUR CONFUSES HERSELF BY TURNING UP TO QUEENS FOR THE SECOND TIME IN HER LIFE.