Police are looking for a woman who they suspect entered a Chicago Salvations Army store this past Friday fully pregnant and later left an hour later with her new born strangled lying inside a plastic bag in the store’s bathroom.

Having asked the manager if she could use the store’s bathroom it is said the woman later gave birth to a fully gestated 6 pound baby boy before using a plastic bag to strangle her child. The deceased child was later found in a trash can when a store employee went to use the bathroom and noticed blood on the floor which then led to the horrid discovery of the child with its umbilical cord still attached.

‘She looked distressed [and] disheveled. The manager sent a worker to into the store to check on the status of the bathroom, discovered some blood on the floor and then subsequent to that we discovered — the worker discovered — a fetus in the wastepaper basket.

It wasn’t premature or born with a light weight. It looked like it went through a nine-month gestation.

The baby was delivered alive and strangled to its death.’

Pursuant to the murder of the child, authorities have drawn up a sketch of the woman hoping that it will jog shopper’s and the public’s memory or incite someone who many know her to step forward. It is said that the woman was of Hispanic origin between the ages of 15-25, 5ft to 5-5 inches tall with long dark hair. 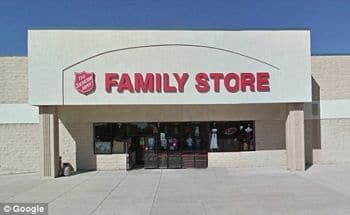 What makes the nature of the crime particularly perplexing is the state of Illinois offers a safe haven law which allows mothers to leave babies 30 days or younger, no questions asked at any police station, fire house or hospital- something the mother must have been aware of had she been contemplating relinquishing her child. Then again it could also be a situation that the mother had an impulsive reflex to murder her child after she gave birth one imagines suddenly at the store. Or could it be a situation that the mother being so young had no redress or knowledge of the safe haven law and decided in desperation to dispose of the child then and there to avoid possible conflict with her family or loved ones that may have had no idea that she was pregnant.

At this stage many questions exist as to why and how this woman murdered her child at the store and the state of mind that this woman was in which facilitated her behaving this way. Either way on some level that afternoon one can presuppose there were two deaths, not just the child’s. What to say or what to do?

Authorities have asked anyone with information to contact the Streamford police at the following number: 630 736 3700