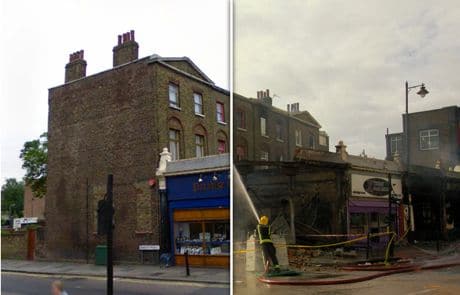 There’s a saying that goes something like this: In the US, the people fear the government but in Europe (like it or not the UK is part of Europe) the government fears the people. This might go to some degree to explain why looting, rioting and outright public discord is beginning to take hold in the capital of the UK (it has been reported the discord has gone on for 3 nights in a row).

But what makes this public show of venting is that it’s coming from those areas which have been systematically been left out of the nice run up in the standard of living that many well to do Brits have experienced over the years. It’s as if there have been two types of Britons existing side by side, one getting the spoils, the other a quick slap to the back of the head. A situation been replayed in many parts of the world…

A cursory look around the world may explain that in some parts this isn’t necessarily about a group of concerned residents taking to the streets in response to the occasional shooting or the occasional new law that reneges on public entitlements, but a group of people who are feeling the oppressive nature of a class divide getting more ominous as the financial and cultural system begins to teeter off balance. For a while most people did what they had to do to bear such inconveniences, continued reading about their favorite celebrities, but now it seems even the perfected concoctions of sex tapes have begun to lose their allure.

Perhaps the world got more courage to show its degree of discontent with the public display of contempt and disillusionment earlier this year with popular uprising in the Arab states. Ostensibly these people were doing the unthinkable- reacting to an extreme class divide which saw many of these nation’s youth at extreme disadvantage, pandemic unemployment and a continual stark class divide between itself and those in power.

Curiously enough, those in power often saw themselves backed by the West, (assuming they behaved accordingly) who have every incentive to keep certain political paradigms in place, whether they were democratic or not made little difference. Making sure that there would be constant access to much needed resources at preferred prices has always been the name of the game. In the meantime the occasional drumbeat about democracy, freedom of speech and wider distribution of wealth were empty puffs in the wind mixed in with a strong serving of one’s preferred alcoholic shot.

Returning to the current fracas in London, which too has seen an extended divide between the haves and the have nots ( which is exemplified if one were to take a cursory look at the English tabloids with a constant pandering to their celebs whilst at the same time vilifying those less off) the current preferred reason for the civil strife if one is to believe the mainstream press is one group of people taking to the streets pursuant to the shooting of one local, Mark Duggan. To this one can only say bollocks.

What may be a more astute understanding of what unnerves many Brits (and ironically has begun to plague the world financial markets and most Western societies) has been the relentless cutting of social services by resident conservative parties.

It might be all about reigning in a runaway deficit and heeding the warnings of various central banks (after all it’s in their best interests that their bond portfolios remain vigorous), but one has to ask a few questions, did those individuals collecting their unemployment checks and welfare stubs single handily cause the ballooning of the deficit there? Or could we perhaps ask aloud whether it’s been a situation of increased military spending and welfare breaks for the corporate elite (never mind the tax cuts for the well to do) that has caused a gutting of public finances, the demise of the manufacturing industry and relocation to the third world and the resultant occurrence of unemployment? It’s a situation that has seen the Greeks rioting for well over a year now as the general population has been relentlessly asked to make sacrifices for the good times that many of them never got to share in the first place.

Of course the rut in the world markets could also be explained to a large degree by the US government at the behest of a strong armed Republican party (and their behind the scenes supporters) to slash $3.2 trillion dollars in public expenditure. Which is molotov recipe for disaster given the strained circumstances of most people’s existences here in the US, where most people have ceded bargaining wage rights, income opportunities and now their jobs (there are up to 14 million people unemployed on the books looking for work, never mind those who have given up…). So whilst over there in the UK the public vote with their fists and molotov cocktails, here in the US they vote by taking their money out of the financial markets and quickly. A frightening reaction which has begun to infect other world markets as the flow of capital has become an intangible abstract one dependent on decimal changes in price quotes and expectations of key players.

But if one wants a start wake up call as to what is actually going on in the streets of London, perhaps this will do it:

reddit (comments on world subreddit) I can smell smoke from my house. There are helicopters and sirens sounding everywhere, and the violence is spreading. I’m worried about what’ll happen after dark. All my friends are scared, and having to chase people from their houses and cars. There are buses on fire, crime escalating. People are taking advantage of the situation. This shit can’t be conveyed through the news. It’s fucking insane…

Some will argue that the fracas on the street has been exacerbated by shameless young men looting and purposefully seeking grief. And although one is reluctant to condone this type of