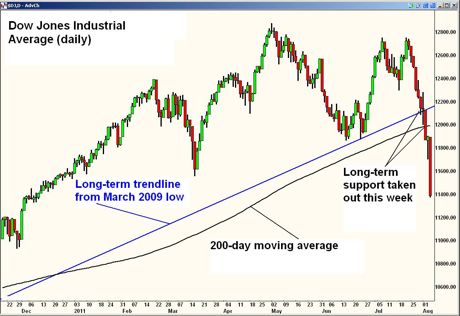 It’s been a kind of weird dichotomy of late, where on one hand you had one enclave, called most of America, having a genuine miserable economic existence and that of another enclave, called wall street and corporations saluting the good life (someone had to live it right?) with even higher highs in the bond and equity markets. If on some level you wondered that this looked like you were living in two different America’s you were right. Because that’s exactly what it has become to live in America these days. In polite society they call it income divide, out on the street, where it’s not always polite, they call it class warfare, and it seemed until right about 4pm this afternoon them rich folk were forever destined to keep living the good life.

Call it a wake up call or a realignment with mainstream, today’s hefty 500 point dip in the dow jones which translates to a more than 4 %, on top of the more than 6% fall we’ve had since mid last week, is a sign that finally no body has it good in America anymore. In fact a cursory look around the world will tell you no one has it good anymore.

Up to recently we’d been experiencing the perverse experience of watching the US equity and bond markets rally onwards and upwards, forever making those players very rich. Making them rich, while the rest of America was living a dire reality, almost geometrically opposed to the wealth these players were making.

It was as if it was one group was getting richer at the expense of others, and depending on your definition of economic empowerment, that is exactly what was happening. But at least we managed to keep that a secret for the longest time, because the implied message was if the investment world made big bucks, it would all trickle to the small guy too by the weekend. Except for some reason the trickling rarely arrived on the weekends. Oh well.

So now that we’re all in the mess called poverty and lack of credit (and even if you could get your hands on it, using it to make yourself more money has become a dying art lately) the question we ought to ask is how did we get here and more importantly how will we get out of this jam? Now that officially them rich folks are just a broke and nervous as the rest of us.

The moral of the lesson, fears of double dip recessions will always send investors scurrying, never mind for a moment that they thought they could live a life distinct from the one most Americans have been experiencing of late. Personally, I’m going to buy the dip, when the dow gets back to 10 000 but then again that’s wishful thinking, cause I haven’t a nickel to my name. But then again, do you?