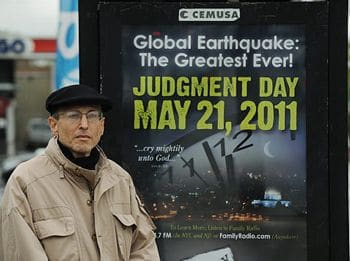 Is Robert Fitzpatrick just a sucker?

nydailynews: “Global Earthquake! The Greatest Ever – Judgment Day: May 21,” the ad declares above a placid picture of night over Jerusalem with a clock that’s about to strike midnight.

“I’m trying to warn people about what’s coming,” the 60-year-old Staten Island resident said. “People who have an understanding [of end times] have an obligation to warn everyone.”

Apparently Mr Fitzpatrick feels quite obliged- which is why he has spared no expense in buying ads with his entire retirement savings of $140 000  that have begun to dot the NYC landscape. Which makes sense when you believe in your heart of hearts that the world will no longer exist come next weekend.

Fitzpatrick’s millenial mania began after he retired in 2006 and began listening to California evangelist Harold Camping‘s “end of days” predictions.

Camping has predicted the end of world once before – on Sept. 6, 1994. When the sun rose on Sept. 7, Camping admitted he might have had that one wrong.

Still, Fitzpatrick remains convinced the beginning of the end is coming next week.

“It’ll start just before midnight, Jerusalem time: It’ll be instantaneous and global,” he said. “There are too many scriptures talking about ‘sudden destruction.'”

While Jesus Christ returns to Earth and all non-believers burn in eternal hellfire, Fitzpatrick says he and all those in the know will be saved in the rapture.

Being saved from eternal damnation strikes this author as a useful part time occupation too. Of course whether he or any of his readers will find the volition to dig deep into their bank accounts is another question all together.

And just in case you’re wondering like this author what Mr Fitzpatrick will think once the world ceases to exist next week, there’s this:

Fitzgerald said there’s no chance that will happen and he has had no doubt about plunking down his retirement.

“It is the date,” he insisted.

Not that he’s been able to convince everyone.

“My sister doesn’t believe it,” he admitted. “I’ve tried to tell her. But that’s pretty much the story with most people.”

Never mind, come next week- the world will be destroyed and gone, or at least it will be for one man who will be putting himself in harm’s way now that he has spent his entire savings on his own crusade. But then again, maybe that’s what the whole campaign is really all about- resurrecting one man’s sense of self before he ultimately leaves the world.