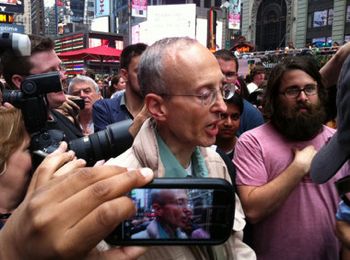 What will Mr Fitzpatrick turn to believe in now?

There’s nothing more humbling and disorienting then the awareness that your personal belief system is now in tatters. Such it seems is the case for one man yesterday, Robert Fitzpatrick who watched armageddon come and go with barely a scratch, that despite him spending his entire retirement savings of $140 000 on advertising warning non believers leading up to the May 21 6pm deadline.

silivie: The hour of doom came and went for Robert Fitzpatrick in Manhattan’s Times Square with no earthquake or heavenly rapture, only a large crowd of media, skeptics and believers clamoring around him asking questions and in some instances demanding answers.

Fitzpatrick of Port Richmond had predicted in his self-published book, “The Doomsday Code: God Is Warning Us Through the Bible,” based partly on the beliefs of radio evangelist Harold Camping, that the world would end in earthquake yesterday at 5:59 p.m.

“I expected it to happen immediately before 6 p.m.,” Fitzpatrick said last night shortly after 6 p.m. outside of the ABC building.

As banal as it appears that a man would risk so much on an event that one could hardly be sure of, one on some level has to applaud Mr Fitzpatrick who stayed firm in his convictions, physically putting his money where his mouth was- a kind of rarity in today’s scattered times.

“I’m tired,” Fitzpatrick said when asked how he felt. “I was working hard trying to get the word out. I’m very surprised. I fully expected that something would happen.”

“I’m wrong,” Fitzpatrick admitted about his May 21 prediction, and he seemed genuinely baffled and confused by the non-event.

“I just don’t understand,” he said repeatedly. “Everything indicted this was the day and that was the time.”

But even to a ordinary sceptic Mr Fitzpatrick’s decision to spend his entire retirement savings on a sure bet sounded preposterous and ludicrous- the same way on some level spending one’s entire fortune on mortgages that only later plummet in value, the cost of an education for jobs that don’t exist or a preferred idyllic lifestyle that is anything but. Could it be that it’s man made lot to vigilantly believe in those things that doesn’t always make sense even if it potentially brings us harm in the long run but valor and a kind of self worth that is so often missing in an arbitrary world?

He said he doesn’t see any point in handing out leaflets anymore and doesn’t know what his next move will be in terms of his faith after devoting much time and money over the past of five years to the Doomsday cause.

In the end- Mr Fitzpatrick cuts a  tragic figure, but at least a solemn one, who to the best of his ability stood up for everything he believed in- even if it wasn’t rational to the rest of us…