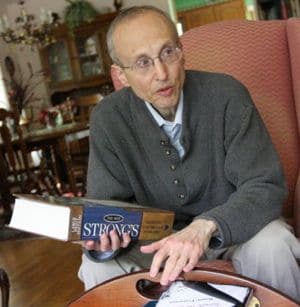 Can you make that a double on the rocks please…?

As the world draws closer to imminent destruction, one man, Robert Fitzpatrick who spent his whole retirement savings of $140 000 this past week on advertisements warning the public about tomorrow’s approaching apocalypse (we kid you not) is preparing for tomorrow by spending it with his mother and then doing a final passing around of leaflets by the subway before expecting himself to be zapped up into heaven.

silive: STATEN ISLAND, N.Y. — The Staten Islander who predicts that the world as we know it will end tomorrow at 5:59 p.m. has high hopes for his own salvation.

“I believe that I will be raptured [instantly transported to heaven]; I hope so, I don’t want to be here for the earthquake,” Robert Fitzpatrick told the Advance yesterday.

According to Fitzpatrick and his guru, radio evangelist Harold Camping, that earthquake will engulf the whole world at tomorrow’s appointed time — it correlates with 12:59 a.m. May 22 in Jerusalem — and fire will consume the universe on Oct. 21.

Frankly one supposes no one wants to be here for tomorrow’s impending earthquake, but perhaps by Mr Fitzpatrick by getting out there in time will able to compel the non believers amongst us of the foreboding doom and have them mend their ways, allowing them to be instantly transported to an all night drinking session with endless supply of Kool Aid and skimpy rent a girls heaven.

The author of “The Doomsday Code: God Is Warning Us Through the Bible” will visit his mother in an Island nursing home. Then he’ll drive to the St. George Ferry Terminal and ride the boat to Manhattan, where he’ll catch a subway in time to distribute leaflets on the southwest corner of 42nd Street and Seventh Avenue.

Other than spreading the news of Judgment Day, he’s not doing anything special to prepare and he doesn’t think there’s anything that anybody can do.

Are we to suppose that Mr Fitzpatrick will be standing idly by on 42nd and 7th tomorrow gallantly giving away leaflets and having the paparazzi treat him like a one way ticket to freakville when before us he will magically transpose himself into a glittery beam scampering onto heaven before giving us one more collective TV hug?

Either way tomorrow afternoon promises to be an eventful one as religious zealots, staunch atheists, a hot and heavy press corps and your average curious by stander come to see if somehow Mr Fitzpatrick becomes the things he predicts – a supernova jetting quickly to another dimension or just another fizzling fool?