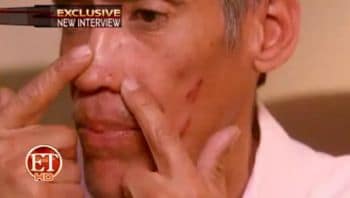 In a sign of how surreal life in America really is, Ted Williams who just over a week was a scraggly homeless bum panhandling on the side of the road who rose to fame after the world was seduced by his ‘golden voice’ is already making the TV rounds explaining his latest personal mishaps- with the law and his daughter. To be sure Williams, who is no stranger to the wrong side of the law (he has an envious criminal rap that includes robbery, forgery, drug possession…) is well on his way of becoming the latest TV spectacle with his almost too spectacular life and as it appears embarrassing assertions courtesy of his ‘fat bitch’ daughter (Ted’s words)…

Let’s listen to the video below and let’s hear Ted tell us about his ‘fat bitch’ daughter who is extorting him, the LAPD that turned up on his doorstep Monday night (Ted even mentions he was surprised that it took the LAPD as long as it took to arrive) and of course all the liquor Ted likes to suck on as brings himself to sleep every night. While Ted is at it – he want’s to show you the fist marks on his face…

One day when Ted is crooning on some far away radio show with his bottle of Grey Goose he will fondly remember the days when he was able to just relapse with oblivion on some desolate highway. At least this time he gets to share the joy with the world and a couple of solitary chilled ice cubes swimming desperately at the bottom of his vodka bottle.