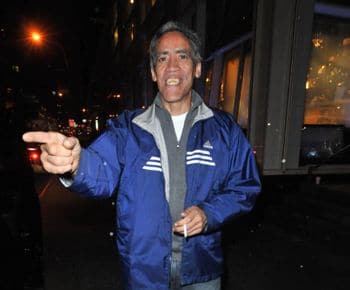 Will the sky pour a drop of whiskey into Ted William’s soul?

It started off like a fairy tale story and at this stage we’re all hoping it doesn’t end up as a horror story, but time will tell. According to press- Ted Williams who on the back of Dr Phil’s bullying inspiration had decided to check himself into rehab, after admitting to a quickie with a box of steel capped Absolut vodka has this evening decided after only 2 weeks in rehab  that redemption and rehabilation isn’t really for him after all, that despite Dr Phil sweet whispering to Ted that ultimately resurrection would look good on his resume. Which only has media pundits wondering is he on his way to some crack dealer this very second and looking for that spare half finished bottle of Schnapps he may hidden under some mattress by the Pasadena freeway?

Dlisted: Ted Williams, the homeless man turned America’s sweetheart, vowed toDr. Phil earlier this month to get clean, hop off the bottle for good and not take this second life opportunity for granted. Dr. Phil set Golden Voice up at a rehab facility in Texas and he was supposed to stay there a few months to deal with his addictions to booze and the bad shit. We weren’t supposed to hear from Golden Voice until he sashays out of rehab in a few months and victoriously sings into the skies causing a flock of nightingales to fly around him.

But victory it seems may only be a quick drive to the nearest all you can drink saloon. And for all we know Ted must have been thinking as long as he could keep the crack pipe to only half full and have the occasional second bottle of gin watered down with Dr Peppers he’d still be able to rock up to work the next morning sounding like a chirpy goldilocks with his eyes closed- but seeing as he is a once again a bona fide radio man, no one would ever be able tell his eyes were taped open with this week’s heavily discounted electricity tape.

TMZ says that Golden Voice is on his way to the airport now. Destination unknown. His girlfriend is also in rehab in California, so maybe he’s headed there.

One day when Ted is strutting his old stomping ground he will pause and wonder as a camera crew comes running up to him, shoving Dr Feel Good idealogy in his face and a tin can of recording deals before turning the other way and quickly running in the direction of hell. At least in between the swigs life will make complete sense until the bottle suddenly finishes. But why be a hero if you’re not prepared to pay the toll fare?