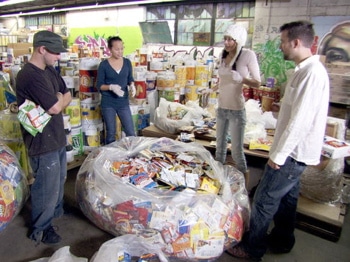 What do you do when you run out of rich, money hungry media whores to cast for a reality show, or even better yet, guidos and guidettes running the town with the poofs and pecks? You pick the next best thing, garbage men. Or in this case, garbage moguls, who take to heart that one person’s trash is another person’s treasure.

“Garbage Moguls,” a new reality television show on National Geographic, takes a different approach to reality in the Dirty Jerz; instead of white trash, it focuses on real trash, and how your entrepreneurs are cashing in. Instead of featuring the likes of Snooki and the Situation, or RHONJ’s Teresa Giudice and Danielle Staub, Garbage Moguls focuses on the garbage business of TerraCycle CEO Tom Szaky.

NY Daily News: “Garbage Moguls” follows Szaky, 28, and his young employees at the eco-friendly company TerraCycle Inc., based in Trenton. TerraCycle “upcycles” waste to create usable products and sells them to major companies like Wal-Mart and Target. Some of their most popular items include a pencil case made from Capri Sun juice pouches and tote bags made from plastic bags.

Very clever; and much more respectable than most Jersey reality sleaze. Maybe Teresa can see if Szaky will through her a couple of bucks for what’s left of her bankruptcy sale; or better yet, maybe Danielle can take the fake hair that got ripped out of her head this season, and TerraCyle can turn it into something useful. We know Danielle is all about giving back to the community.

“There’s a certain kind of irony there,” Szaky tells The News. “Our show wasn’t picked up because it’s based in New Jersey, but it’s an awesome coincidence that just as Jersey is getting big in the world of reality TV, our show is trying to make a run for it.”

There is an irony Szaky, and that is, you can take trash in Jersey, and actually make it worth something. Too bad you can’t recycle people.