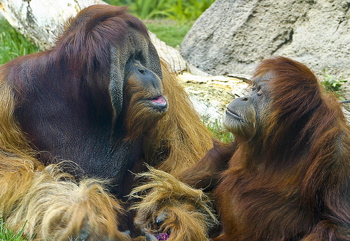 Have you tried your 5 pound frozen blood popsicle today?

Like most people even animals can get irritated when the thermometer goes north of 90 degrees. That said what tricks is the Franklin Park zoo in Massachusetts using to help the heat at bay? Get ready to get your paws wet, literally….

Source; Boston news Beverly the kea pecked at an apple juice ice treat. Ernie the ostrich bathed in a mist bath evocative of an oasis resort. And a special summer delight awaited the ferocious big cats: Popsicle-esque concoctions made of frozen blood.

Mmh, yummy. Maybe the zoo is onto something and instead of iced tea I might personally be switching to iced blood tea and jimminicky crickets encrusted in ice cubes. Yowza, could you imagine the crunchy sound the thing would make in my mouth once I got to the cricket part.

For Christopher the lion and Luther the tiger, relief can come in the form of bloodsicles — the frozen treat made from blood. The gory goodies sometimes are as large as five gallons, Piazza said.

Less visceral, no less earthy, were the frozen concoctions doled out to other creatures.

The pottos — small, nocturnal primates from west and central Africa — enjoyed a frozen banana. The cotton-top tamarins, small primates found in Colombia, munched on bugs and carrots in little ice cubes. And some homo sapiens — people visiting the zoo — thermoregulated under a large tree, slurping down ice cream.

“It’s animal nature just to get in the shade,’’ said Piazza, who, having lived in Texas, thinks of 100 degrees as “a cold day.’’

Even the animals most acclimated to high heat do not turn up their beaks, snouts, or muzzles at the chance to chill out.

Which pretty much settles it for me, next time I go out for dinner I’m going to ask for a frozen cucumber soup with a handful of fly legs. Take that!