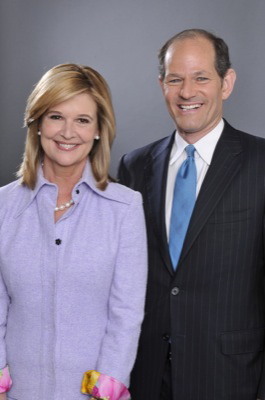 CNN has announced that every prostitute’s favorite FORMER New York Democratic Governor Eliot Spitzer will get his own television show along with co-host, the conservative Washington Post Pulitzer Price winning columnist, Kathleen Parker.

Though only meeting a few weeks ago, the two seem to have solid chemistry and are ready to fill Crossfire’s Campbell Brown’s 8pm time slot that he resigned from last month due to “poor ratings and the inability to break through one of cable news most challenging time slots”. Due to the fact that at 8pm they are competing with Fox News’ Bill O’Reilly, MSNBC’s Keith Olbermann, and HLN’s Nancy Grace. All more annoying than the other, with in my opinion, Nancy Grace topping them all.

The whole idea of Mr. Spitzer getting a show brings up one big question…How? How can a man, who threw away a respected political career and his position in society all because he wanted to get his dick wet, be able to host a show on a highly trafficked time slot on one of the largest television stations in the nation? This is absolutely absurd. How can our culture live with the idea that if a man in his position of power, bangs out hookers and embarrasses his family, state and nation, can still if not, get a higher position of power. While if a woman, say like Ashley Dupre be forever pigeon holed as a ho no matter what she does until kingdom come?

This goes to show that the Media apparently did not have enough swing to show that Mr. Spitzer was in fact, a douche. Like the awful Junior Trump show, this show will get a lot of views based on the fact that they have the notorious Eliot Spitzer as a host. I am very sorry for his co-host Kathleen because honey, expect minimal attention. Let’s just hope for Eliot Spitzer, when the IRS checks out suspicious transactions this time during his fame, they don’t see Emperors Club VIP on the bank roll.