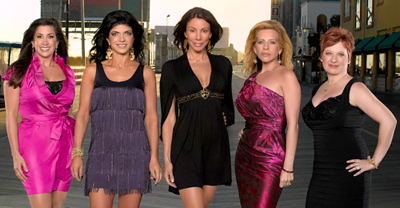 The sad truth about being a housewife from NJ.

That said, this is what we all came up:

1/ Dating in NY has always been about more maintenance and as much as you can tell us you live near of around Princeton or one of those nice suburbs a bum living in the basement of Hell’s Kitchen will always say he’s got it better.

2/ Countess Lu Ann was once a countess, Danielle Staub on the other hand a coke/crack whore and now a soon to be released sex stunt.

3/ Bravo are now thinking about making a show called Real Housewives of Long Island- all that the housewives will get is a summer share and a free drink ticket at Michael Lohan’s soon to be opened new night club down the road- ‘Controversy.’

4/ No one really expected the NJ version to succeed but since it has been able to define smut for us, that’s about where it will stay.

7/Them bitches in NJ need to wake up and hire themselves some pr. Vinnie our blind janitor thinks that they should make ‘Real Housewives of NJ,’ the movie and then see them sales go up.

8/ If Danielle could figure a way to kidnap Alex and Simon from NY and hold them for ransom the producers would eventually give up and then drop the salaries of the NY housewives to $7500 an episode, that way the humiliation of being so under compensated in the future will be smaller.

9/ Maria, my girl on Friday thinks if Kelly Bensimon made out with Danielle Staub then maybe the hype would translate to an extra $50 that month.

10/ No matter how you cut it – ‘money can’t buy you class, but at least it can buy you a nice view over the Hudson river.

Why I don’t want to grow up and become a reality star.

The Love Parade hosts the Real Housewives of New York.