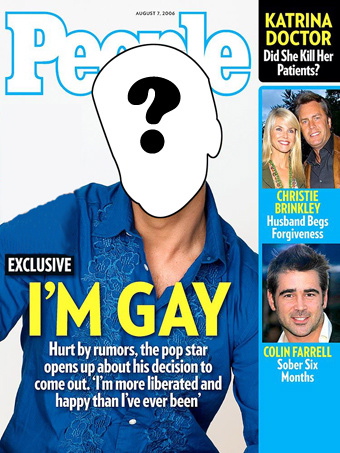 How to market your sexuality and career at the same time.

Ever since Ricky Martin came out a month ago and told the world he is gay some Hollywood celebrity star has been going for long walks thinking to themselves they could do this too, and in one single People cover they could once again face themselves and the nation as well as probably reignite their career. That said, which hapless soul out there is finally going to come out. We take you for a tour and wonder out aloud-

1/ Our first choice would be Jon Gosselin. Because after Kate Gosselin, and that little college dorm girlfriend defecating on his rubber doll how could he not hate all vaginas.

2/ Chacchi, Scott Baio. Because now that he has spend the best half of a year texting he has gay best friends and Neo Nazi best friends too, this would be a good way to be loved and not forced to move to Canada.

3/ Robert Pattinson. There is some fear that there aren’t enough young people captivated by his looks and a recent poll informed him that the gay community would make amenities for him if he ever came out.

4/Larry King. Ever since his on and off marriage, Larry has been thinking back to that moment back in 1972 when he looked at some young hot man and nearly got an erection.

5/Michael Jackson will reach out from the grave and announce all the little children were really disco boys he found off Malibu Beach.

6/ Lindsay Lohan, because at this rate it’s better being gay than being a washed up crack whore.

7/ Eliot Spitzer has been having second thoughts about being shut out of public life and he’s been secretly wondering whether it’s better to be known for giving young boys handjobs as opposed to being given handjobs by crack whores who were paid for with through public funds.

8/ Michael Lohan, because he’s realized that once his daughter dies of an overdose the only way he’s ever going to get a free lunch in Hollywood is to begin to concoct his own fantasy now.

9/ Steven Seagal. Because the tears just wont stop running down his face.