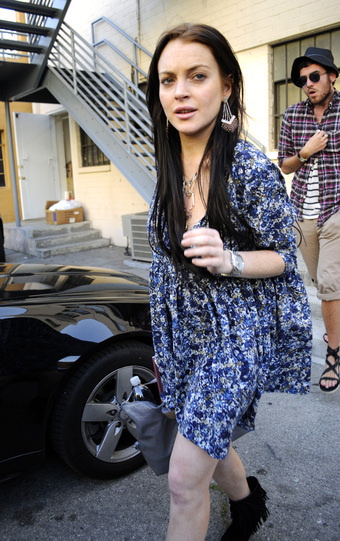 The continued downward spiral of an American media whore.

Life is really sucking these days for Lilo. Huge credit card bills, bounced checks to the landlord, boozy crashes on the pavement, being barred from certain prestigious parties, barred from India, barred from Samantha Ronson and lost dollops of coke bags in her couch and now this one, being implicated in a missing Rolex watch.

Accused kleptomaniac Lindsay Lohan has reportedly been named as “a suspect” in the theft of a $35,000 Rolex watch, authorities said.

The pricey watch belongs to one of Lohan’s “friends” who accidentally left it at the “Mean Girls” star’s Los Angeles house earlier this year and never got it back, TMZ.com reported today.

Sources said cops have “photographic evidence” which could prove Lohan, 23, knows where the Rolex went.

We’re guessing it’s where her ‘missing’ coke bags are. But of course history always has a funny way of repeating itself with Lilo.

Last year, Lohan was one of a group of people questioned by Scotland Yard after jewelry worth $400,000 went missing after a magazine photo shoot in London.

The diamond necklace and earrings were modeled by Lohan during the Elle photo shoot at Big Sky Studios outside London.

The jewelry, which was lent to the magazine by fashion house Dior for the day on June 6, was reported missing two days later.

Lohan was never arrested and the case was never solved.

Of course there are more instances of Lilo ‘mistaking’ fur coats and cocaine bags for hers and the world nearly colliding inside her nostrils. This weekend it’s colliding on her wrist.

Aren’t you grateful that ‘Lilo’ can entertain you whenever she is on the screen or off screen?

nypost.com
Will Lilo get out of her $600 000 credit card jam?
Lindsay Lohan is broke and the world is shattered.
The paparazzi are now wondering when Lindsay Lohan will ‘kick’ the bucket.
SHARE
Facebook
Twitter