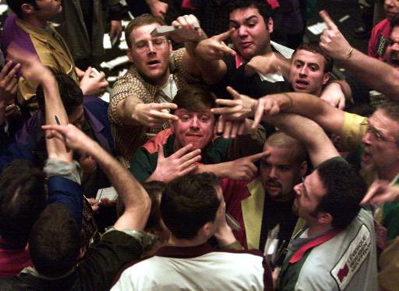 they could get their size 2 ass into. They were hot to go and since money yields were next to nothing all the smart money was chasing the hot sexy girl who if you know anything about hot sexy girls, have a thing for being flakes and opting out on you when the next better date comes her way.

So there’s ‘wiener breath,’ trying to figure out how he’s going to outsmart life and make the next batch of money that will help him reaffirm his existence, because as we all know by now – you ain’t anbody until you’re famous, a socialite, a model or a rich banker. (Just ask Jules Kirby or Tinsley Mortimer if you don’t believe me). And ‘wiener breath’ knew he could at least be that if he tried. And how he tried.

At first he kept hustling the same old products that everyone wanted, jumbo planes, model wives, houses in the East Hamptons, returns that could bear or at least match the Standard and Poor’s Equity Index and when he thought he could do no more the football field would bellow still – “More, give me more.”

He really hadn’t quite understood that there was all this money sitting on the sidelines, money that wasn’t going into paying people proper salaries, health care, pensions that was just sitting there not being put into good use, given how carefully it was extracted out of the American worker. So ‘wiener breath’ started inventing new products to sell to the world, because it was now a race to have the biggest house after Madonna and pay $600 for a hamburger. He of course called those products- CDO’s, (Collaterized debt obligations) and they were all the rage.

Of course there was a problem in all of this, the guy who was funding all these yummies (the abused worker) was now himself buying into the myth that even s/he had to look like the equivalent of a Heidi Montag barbie doll in his or her 3rd house. The only hitch of course being  s/he had no money, because as you remember their money was being used by their bosses to pay for their $600 hamburgers.

Compelled nevertheless to believe in the American dream he stoically moved on and was one day elated when our former president George W said he too deserved to be happy and was readily approved for a $9 million loan with $179 in the bank account. Everyone rushed to package that loan and get their cut and by half past six that evening they too would eventually find themselves sitting next to Madonna at some cabana (or at the very least catch a sight of her on her way out) because if there’s one thing we all know about life is that there should never be one day in your life where you go without happiness or want.

Eventually a few ‘wiener breaths’ like Mr John Paulson, a smart wealthy investor on behalf of a collection of rich investors like him and his hedge fun Paulson could no longer stand the goo dripping from the sky. So he devised a clever idea and with the complicit help of Goldman Sachs sold  ‘synthetic products,’ called CDO’s (collaterized debt obligations) to emulate the performance of particular real estate tranches, which he by now expected to crash. The only hitch being every unit selected in the synthetic unit (by Mr. Paulson) was a sick dog which Goldman kept a secret from its customers because customers never really like buying things when it’s painfully obvious that they will eventually die or turn cabbage mangy yellow.