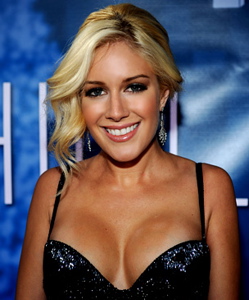 When is enough- enough?

Seems like latest media whore in town, Heidi Montag is trying to figure out new things to tell us in the hopes of keeping us preying and hoping that her existence never leaves the utterance of our breath. So what gives now? Well Heidi has decided to reveal that she’s more game than ever to have her ass and facial features re arranged for the n time even if it potentially kills her. Does this sound logical and frankly does anyone pay attention to this Malibu upstart? (the answer unfortunately is yes on both fronts…)

Reports the NY Daily News who have lowered themselves to being complicit in her propaganda efforts:

Despite the fact that her recent plastic surgery spree nearly killed her, Heidi Montag says she is open to having more.

The 23-year-old reality TV tart told “Access Hollywood” that she almost didn’t wake up after the 10 procedures she had in one day.

“I almost died after my procedure,” Montag said. “I had too much Demerol like Michael Jackson did and my breathing was five breaths per minute which is like almost dead. [I was] in an aftercare center, there were nurses that were supposed to be tending to me at all times.”

Heidi are you kidding us or are you just showing off?

“I’m starting to move my face more and more,” she said. “[But,] I feel very plastic … especially when I first came out, it was so hard for me even to smile and it’s still hard for me to chew sometimes. But it’s feeling more and more natural everyday because the swelling is going down.”

What unfortunately isn’t going down is our perplexed wonder that Heidi is still hanging around. In any event Heidi is proving that if you’re going to make it looks and stupidity really going a long way.

Hollywood is only a plastic surgery appointment away…