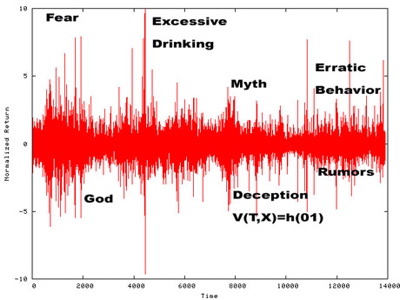 Paulson who made lots and lots of money on the other side of the bet) and the public was told that it would have to pony up money to keep these mainstream investment houses in business or the world would implode into a ‘Clockwork Orange’ movie out take. Of course very little money was posted for the guy with $179 in his bank account and his new 79 million dollar debt. Not everyone it’s implicitly understood gets to survive in the capitalistic world, but who does get to survive are the bankers that keep winning rain or shine. And that’s when the market roared back to life in March/April 2009 when it looked death in the face and cheated it.

Now that the world has been put on notice that the SEC will no longer be taken for a joke a whole lot of risky asset classes suddenly began falling out of bed when it was announced that Santa Claus was no longer happy with his nephew Goldman Sachs. Even gold the first thing that everyone flocks to in times of distress fell down and hurt its knee. But there’s more reason to worry, because this now gives the government the right to suddenly impose transparency in the nebulous world of derivatives trading that normally happen in cubicles 3 miles into the air. That of course is a bad idea, because it means not everyone will be allowed to get shit faced anymore or call up the government for a hand out when things backfire. It also means the end of cowboy trading and gaming the system and the American public, and any capitalist will tell you the best way to make lots of money is to give the public what they want or what they should think they want. Of course the government will be closing the bar early going forward and that can only mean one thing going forward- it’s going to be a rocky retreat back to gravity, especially when we’re all sober now.

Note- the author of this article spent over ten years working as a buy side derivatives trader for a variety of funds and can not to this day understand why most investment banker sales people are so illiterate and commissioned to sell such instruments to clients. Never mind their ivy leaugue backgrounds.

Observations of a Wall st Trader.

The Culture of Fat Cats, Fast Cars, and the Dreams That Sometimes Go Bust.

The world is wondering if Goldman Sachs are crooks after all.»

Wall st boys told to ‘not even think about buying that Ferrari.”

Next time you contemplate a career change why not become a rocket scientist?