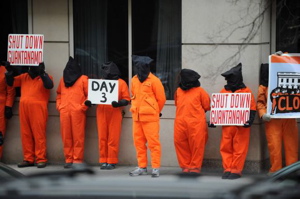 Pleading democracy whilst practicing Lawrence Wilkerson. Out of London this morning comes a very disturbing report questioning the integrity of the previous Bush administration and its cohort of cronies with respect to the illegal prolonged detaining of suspects without a hearing. The fact that it comes out of London and not the US is another indicator that the US press has been equally complicit in deflecting attention to harrowing episodes of obstructing justice.

George W. Bush, Dick Cheney and Donald Rumsfeld covered up that hundreds of innocent men were sent to the Guantánamo Bay prison camp because they feared that releasing them would harm the push for war in Iraq and the broader War on Terror, according to a new document obtained by The Times.

Should this surprise us, offend us or gravely concern us, that a power base purposefully obstructed justice so it could continue its push for war in the Middle East? Equally more heinous, is why is that an intelligent press corp refused to give cause to such concerns and instead played along with the sudden idea that if you are a suspected terrorist new rules can be invented which go over the Geneva convention which unilaterally insures all prisoners rights. But hey this is a democracy and in a democracy you do what you are told. Right?

The accusations were made by Lawrence Wilkerson, a top aide to Colin Powell, the former Republican Secretary of State, in a signed declaration to support a lawsuit filed by a Guantánamo detainee. It is the first time that such allegations have been made by a senior member of the Bush Administration.

The first time they have been publicly made is what the article should read. Continues the Times:

He also claimed that one reason Mr Cheney and Mr Rumsfeld did not want the innocent detainees released was because “the detention efforts would be revealed as the incredibly confused operation that they were”. This was “not acceptable to the Administration and would have been severely detrimental to the leadership at DoD [Mr Rumsfeld at the Defence Department]”.

Which begs the question. What is acceptable behavior and how can one preach that they are pursuing democratic goals when they themselves are behaving like a despot. Weren’t these questions that came to mind to the US press in 2002? In any event we think it may be a good time to send the real terrorists for an extended lock up, but then again it’s an argument that you are unlikely to hear from the supposed ‘elite’ members of the press corps, but then again this is still a democracy from what I read somewhere.