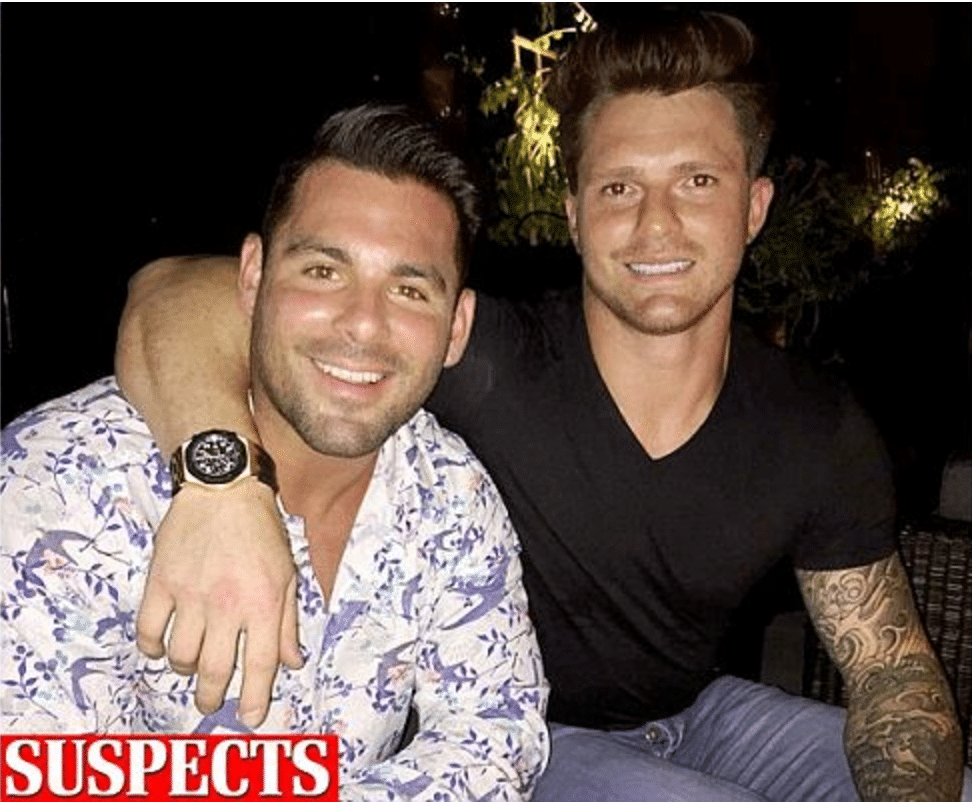 Lawrence Dilione and James Rackford charged with the murder of Joseph Comunale after stabbing him 15 times in the chest during a night of private partying.

NYPD police Thursday afternoon charged James Rackover, 25 and fellow accomplice, Lawrence Dilione, 28 with the murder of 26 year old Stamford, Connecticut man, Joseph ‘Joey’ Comunale after the Hofstra student was knifed no less than 15 times after an argument broke out.

Grizzly details told police included the victim being stabbed 15 times in the chest after an altercation broke out during a prolonged evening of revelry.

The murder charges against the socialite/party boy along with that of Dilione, a New Jersey business owner after Dilione led police to where the body of Comunale was buried. A location minutes away from Lawrence Dilione’s business officers in Oceanport, Jersey Shore.

It was there that police found the partially burned body parts of Comunale, a Hofstra University student who also doubled as a sales associate, bludgeoned with knife wounds. His body left in a shallow grave in marshland.

James Rackover is 1 of 2 suspects charged with second-degree murder in the death of missing CT man Joey Comunale: https://t.co/PuX3u3RMMe pic.twitter.com/QNYWj6T864

James Rackover: How I escaped my criminal past as James Beaudoin

The murder charges come after Joey Comunale is believed to have come across James Rackover and his posse at a nightclub Saturday night, only to later accept the socialite’s after hours invitation to return to his swanky Upper East Side abode to continue a night of cocaine taking and revelry.

A night of revelry at which point led to a disagreement and the knifing of Joey Comunale in the early hours of Sunday morning after the youth had been observed on video briefly emerging out of the building circa 7.30am and returning moments later back to the fourth floor apartment of his host, never to be seen alive ever again.

According to pix11, upon Comunale being stabbed to death, his body was dumped behind a flower shop with one of the charged men attempted to burn the body.  Gasoline was found at the 1-foot deep grave after attempts had been made to burn the victim’s body.

Comunale also suffered a broken pelvis, leading to speculation that his killers tossed the body from the fourht-floor apartment.

The motive for the vicious attack remained under investigation, although sources cited via the nydailynews indicated the killing occurred after Comunale rejected the advances of one of the men inside the apartment.

‘He was one of a kind. He didn’t deserve this — he didn’t go looking for trouble,’ Pat Comunale said.

Adding: ‘We’re in denial, All I have left is his friends.’

Told Chief Boyce today, ‘We have blood on clothing and there appears to be bleach on that clothing as well, to cover up the blood.’

In its online listing, the Grand Sutton is described as ‘an intimate building’ with all the classic Upper East Side amenities: a doorman, concierge, courtyard garden, gym, etc. Condos in the building currently sell for around $2 million and rent for around $6,000 per month.

Since their arrests, both suspects have retained lawyers and have refused to cooperate with authorities….