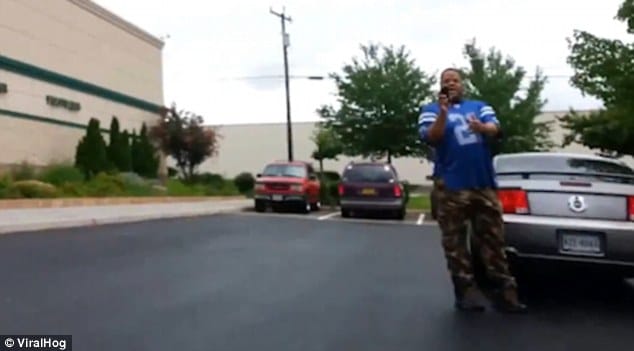 Throwing further weight behind the assertion that former WDBJ reporter, Vester Lee Flanagan was struggling to adjust to society and dealing with those around him, a youtube video (see below) has emerged showing the embittered man provoking a roadside confrontation.

Involved in the incident was local Virginia man, Brandon Foster who told how Flanagan followed him after berating Flanagan for driving ‘like a lunatic at more than 100mph’.

The road rage incident told Foster via CNN happened in the early weeks of August, telling the outlet that it was apparent that Flanagan ‘was not all there.’

The clips begins as Foster is seen alighting from his parked vehicle, in the distance, Flanagan is threateningly observed standing waiting for the man whom he has just followed off the road after Foster remonstrated Flanagan at a red light for ‘driving like a maniac.’

It is here both men are armed with their cellphones as they take to filming the other as Foster suddenly finds himself forced to wonder for the safety of his well being after being followed into a parking lot.

In the video, taken when Flanagan had followed Foster after their initial confrontation, Flanagan asks Foster: ‘Are you finished?’

Foster tells him: ‘I’ve been finished. YOU followed ME here, a**hole.’

Flanagan replies: ‘OK. You need to lose some weight, sir.’

In the video description, Foster wrote: ‘I called this man out at a red light for driving like a maniac.

‘He then followed me to my destination driving recklessly, and stopping traffic to continue the argument, the rest is on film.’

As the clip ends, Foster can be heard saying: ‘You call a guy out for driving like a p***k and you think he’s going to lose his mind.’

The video depicts Flanagan in blue jersey and khaki pants, standing next to a silver Mustang – thought to be the same one he drove as police chased him yesterday. Of note he is also observed filming the confrontation that he set up. A similar course of action the man would repeat in the weeks ahead with far more deadly and sinister consequences, where Flanagan shot dead two former colleagues whilst on live assignment before fleeing and shooting himself dead.