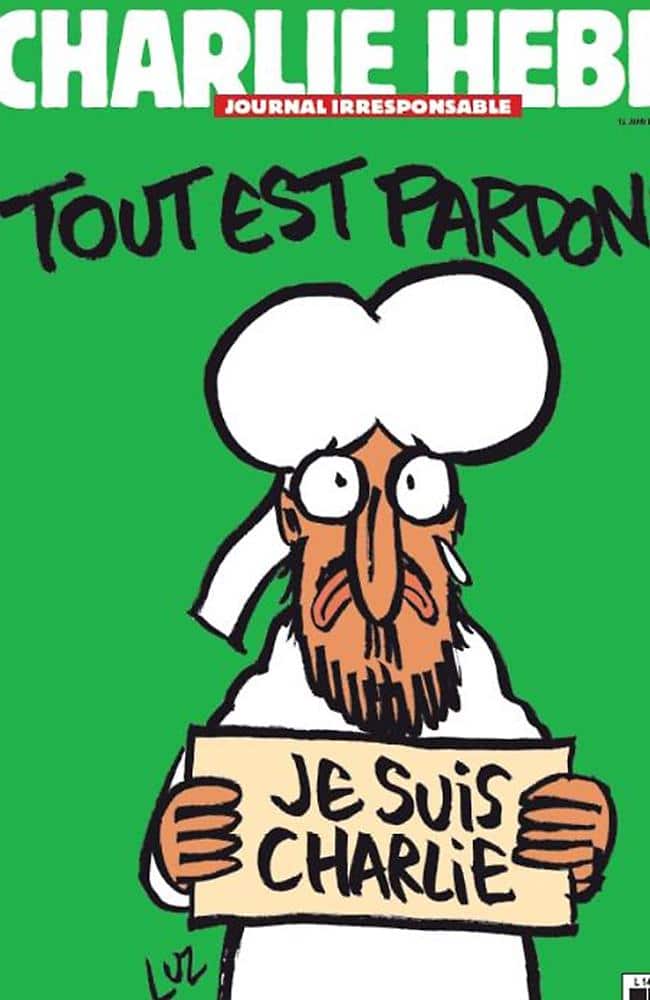 In a sign of defiance, Charlie Hebdo cartoonist Renald (Luz) Luzier has come out with guns blazing with a new Charlie Hebdo cover since last week’s senseless slayings were he has unapologetically maintained the journal’s editorial stance, albeit with a softer more sympathetic stance.

Whilst we may applaud those outlets and institutions who defend society’s right to disagree with them, what about those entities who choose to condemn or disparage others points of view or existence (as Charlie Hebdo was accused of)? Are we to excuse those outlet’s unrelenting position because they are free to think and say as they please (because we are told we live in a free society), irrespective if what they think or say is deemed predatory or disparaging? Or is that simply a function of one’s political motive and what suits one’s agenda at the moment?

And what if one simply choose not to run the new cover Charlie Hebod cover as some outlets have? Are they capitulating to political correctness or choosing to express their own free will which they should have a right to do so as well?

Police chief in charge of Paris Attacks commits suicide. Was he killed off?

In choosing to run a cartoon of Muhammad on its next cover — the same type of image that inspired last week’s mayhem, ‘Tout est Pardonne’ (’All is forgiven,’) which French media has since interpreted as depicting Muhammad forgiving the cartoonists for lampooning him Luzier told that he aspired to show the resilience and power of free speech.

Offered Luzier: ‘It is we who forgive, not Muhammad,’

Columnist Zineb El Rhazoui would further clarify the outlet’s editorial stance by telling via BBC : ‘I think that those who have been killed, if they were here, they would have been able to have a coffee today with the terrorists and just talk to them, ask them why they have done this,’

‘We feel, as Charlie Hebdo’s team, that we need to forgive the two terrorists who have killed our colleagues.’

One cartoon shows a woman raising her burka to show her nude body. Another is a crude sexual joke toward the pope told a BBC News correspondent with an advanced copy

Clarifying the journal’s stance, Editor-in-chief Gérard Biard: ‘We needed to figure out how to continue laughing and making others laugh. We wanted to analyze, say something about the events,’

‘This drawing made us laugh.’

Adding: ‘We did not want masked men on the cover. We didn’t want more of that. That’s not us. We didn’t want to add to the gravity. It helps to be able to breathe a little.’

The comments would follow a similar line of thinking from political leaders, including UK Prime Minister David Cameron and Deputy Prime Minister Nick Clegg who both expressed their support for the publication, with Clegg reiterating: ‘I don’t think you can have freedom unless you are also free to offend each other in an open society.’

All true and of brave in the face of those who would resort to violence to take such rights away from us but perhaps cynical given most political establishment’s predilection towards serving and pushing ahead one agenda or collective above others even if that means the subjugation and subordination of those collectives which has led to the Muslim community in France incurring disproportionate economic destabilization and social inequity.

And then there was this comment on the web that made me pause:

There’s a fine line between satire and bigotry, and given France’s anti-Islam reputation and the subject matter of some of the images Hebdo published, it appears Hebdo crossed the line toward bigotry. Satire is best when it promotes critical thought about peace and justice, not when it inspires hate and intolerance.