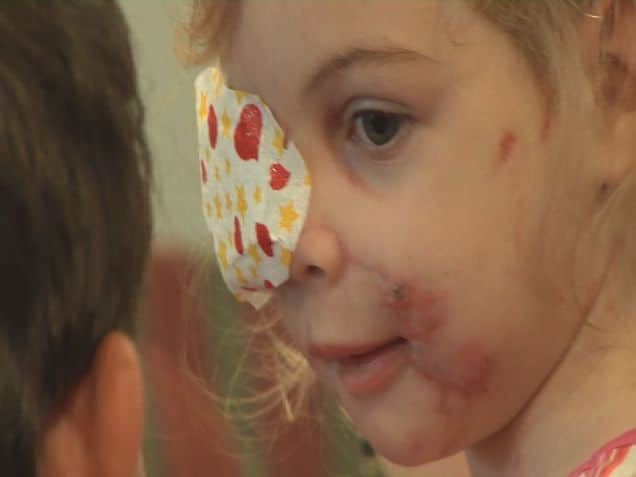 Since the open outcry of  Victoria Wilcher purportedly suffering at the hands of KFC staff and being asked to leave for presumably offending customer sentiment, Victoria Wicher’s family have come to face great scrutiny with new revelations telling that in the end, the incident that Wilcher family so ardently claimed came to happen actually never happened.

The since revealed Victoria Wilcher hoax has in effect taken the goodwill that the family had been able to muster via social media and the currying of media into quite the opposite, with the family now the subject of disgust and scorn, and disbelief that someone could use the affliction of a 3 year old girl for mercurial gain.

Nevermind the fact that the family has since been able to secure (for the time being) $30K from KFC and another $135K from a gofundme page from well wishers who simply dared to care about another human being they never met before. A gofundme page which mysteriously as of this afternoon has no longer come to exist.

Explains wtvr: The CEO of the fund-raising webpage GoFundMe, Brad Damphousse, issued a statement Tuesday suspending the campaign and offering to refund donations.

“In lieu of the ongoing uncertainty surrounding the ‘Victoria’s Victories’ online fundraising effort, GoFundMe has temporarily suspended the campaign until the full truth is made clear,” the statement said.

The mayhem came after a regional media outlet, Lauren Leader Call came out with an article quoting a source which told that an investigation by KFC has revealed that none of the claims that the girl’s grandmother, Kelly Mullins had come to make were actually true, that her story was riddled with inconsistencies and unsubstantiated ennui (which is to suggest little did Kelly Mullins realize there were cameras running every moment at the venues and times she claimed).

In fact by the time one came to the conclusion of the article it was sorely apparent that the public and KFC had been treated to an awesome hoax of dizzy proportions.

Except that is not the way Victoria Wilcher’s family saw it, choosing instead to believe that public sentiment would sway with them (it had so far after all despite prior misgivings) and they would simply be able to shrug off another media nuisance report. Until by late morning they couldn’t.

Nevertheless the family chose to run a posting (see screen shot below) pleading that they had not orchestrated a hoax and everything was fun and dandy in lalaland. Except it really wasn’t.

Refusing to take calls from the media, the family has this afternoon taken to hiding under the very dark recesses of the universe as they have now conspicuously retreated to the oblique world that they came from. Victoria’s Victories facebook fan page gone along with the gofundme page, also gone. What will happen to the money and mostly sadly of all, what will happen to a young girl whose family may have at one stage meant well will be yet to seen. 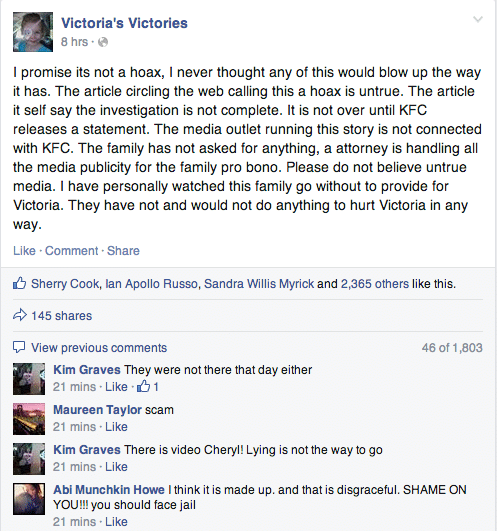 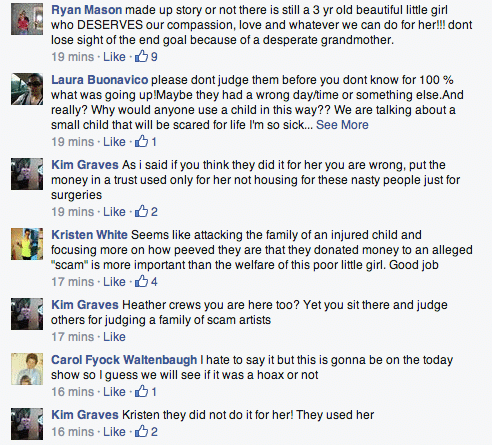