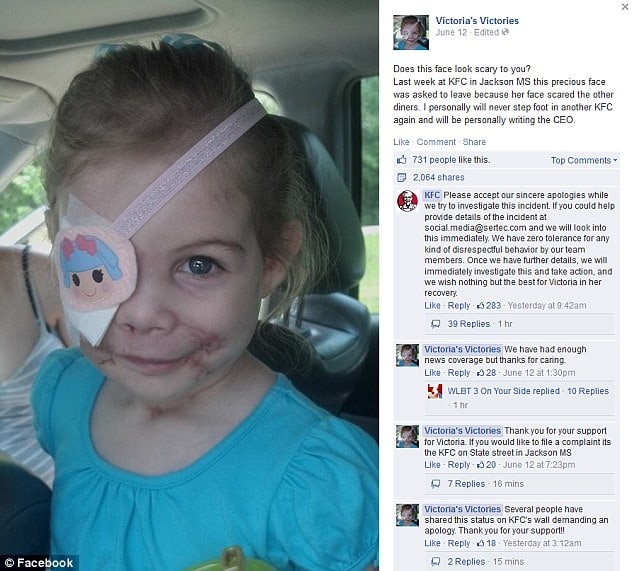 Original article: The family of three year old Victoria Wilcher have been left outraged after a recent trip to a KFC outlet in Jackson, Mississipi saw the toddler and her family made to leave on account of an eye scar purportedly ‘scaring other diners.’

‘Does this face look scary to you?’

‘Last week at KFC in Jackson MS this precious face was asked to leave because her face scared the other diners.’

Victoria Wilcher’s came to be injured in an attack in April at the hands of a pit bull, when three of her grandfather’s dogs ran into his home in Simpson County, Mississippi. The dogs ripped through the back door of the home and jumped on her.

The dogs then dragged the little girl outside into the backyard, where they continued to maul her before her grandfather, Donald Mullins, and his girlfriend, Rita Tompkins, futilely attempted to keep the pit bulls at bay. The dogs then attacked their owners, causing Mullins to shoot them dead.

Rushed to the emergency room, Victoria Wilcher through no fault of her own came to find herself incurring a shattered top and bottom jaw, broken cheekbones and eye sockets, along with a broken nose. According to the first posting on Victoria’s Victories, Wilcher lost her right eye, and lost the ability to move the right side of her face.

Mullins and Tompkins would be arrested on child endangerment charges. The couples eight surviving pit bulls would come to be seized by Animal Control officers.

Wilcher was in the hospital for approximately one month after the attack. Upon her return home, she continued with physical therapy and wearing a feeding tube.

‘I took her to the doctor and I went to KFC.’ Wilcher’s grandmother, Kelly Mullins, told WAPT.

‘I ordered a large sweet tea and her some mashed potatoes and gravy because she was hungry. She was on a feeding tube at the time, but I figured she could just swallow (the potatoes).’

‘They just told us, they said, “We have to ask you to leave because her face is disrupting our customers”. (Victoria) understood exactly what they said.’

The grandmother would leave in tears. The experience would leave the toddler traumatized.

Reiterated Kelly Mullins: ‘Now when we go somewhere, she don’t want to get out.’

Since Thursday’s facebook posting, outpourings of sympathy and anger at the company have flooded the family’s page, prompting an apology from the chain. 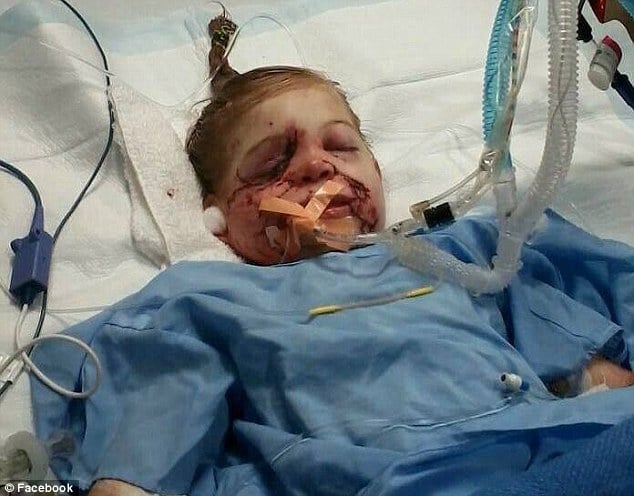 Retorted KFC spokesman Rick Maynard: ‘KFC launched an investigation as soon as we were made aware of this report,’

‘We take this very seriously, as we have zero tolerance for any kind of hurtful or disrespectful actions toward our guests. Our investigation is ongoing, but we will make things right for this beautiful little girl and her family, and will work with the franchisee to take appropriate action at the restaurant.’

KFC has since taken to commenting on Victoria’s Victories Facebook page, presumably in the hope of stemming public outcry against the outlet:

‘KFC has reached out for more information thanks to the overwhelming support for Victoria.’ reads the post

‘Thank you for sharing her story and please continue to pray for her and her recovery. She still has several surgeries in her future and will continue to need our love and support.’

And then there were these following comments on the web that caught my attention:

If anyone was wondering, apparently this isn’t the real story of what happened. According to people in the town, Kelly had approached the store manager to ask that they throw several children out because they were staring at Victoria. Not making fun of her or bullying her, just staring. The manager had no reason to throw them out because they weren’t being openly rude or nasty to the point of unreasonableness, so she refused. Then the grandmother started getting angry because the manager wouldn’t do what she said and became so disruptive that she was the one asked to leave. At no point did anyone say that they were being thrown out of the store because of the injuries to Victoria’s face. It was all because the grandmother reacted poorly to children showing a natural curiosity over Victoria’s injuries. Maybe the children’s parents could have asked them to stop staring because it was impolite, but according to the stories going around, they weren’t doing anything over the top.

After they left, the grandmother started going to every news station she could and told everyone that KFC was mean to them, all the while telling them that she was doing a fundraiser to pay for Victoria’s hospital bills. I hope that none of this is true, but it sounds a little too reasonable for my comfort level.

Ignorance is something like an illness for which there is no cure. Besides having no recover from a dog attack now this little one has to recover from emotional hurt from some ignorant people who should know better. Please give her extra cuddles and hope she makes a quick and full recovery. Amazes me that some people could be so callous to an innocent child. KFC employee as unhealthy as the food KFC serves!

Sometimes you get a rogue employee, and companies do their best but can be taken by surprise. 18 years ago a mothercare employee decided to kick me out the shop for breastfeeding and her horrified colleagues dashed over and asked her what on earth she thought she was doing. Her supervisor took her away.

Would they ask a disfigured war veteran/hero to leave..I think not, so why this beautiful little girl…Disgusting is what it is, some of todays society are reprobates!!!

She was attacked by three of her grandfathers Pit Bulls and he owned 10, really? What the hell is this guy owning 10 Pit Bulls for. Must be some really ignorant people to have this many dangerous dogs around this beautiful little girl.

Sad when humanity is more concerned about having a comfortable dining experience rather than to make comfortable the child’s dealings with a situation such as this. The manager should have sensitivity training with handling situations as this as a more positive solution could have been achieved. Its bad enough that a child had to go through the horror of being attacked by an animal, it’s worse now knowing that people look and make comments and find her ugly in their perfect world. Stay strong little one…..you will be better soon enough and as for KFC, handle it. 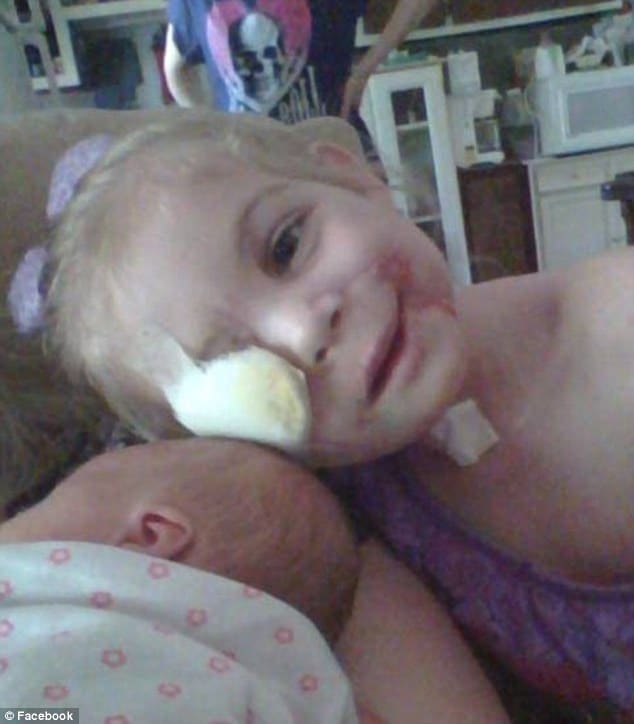 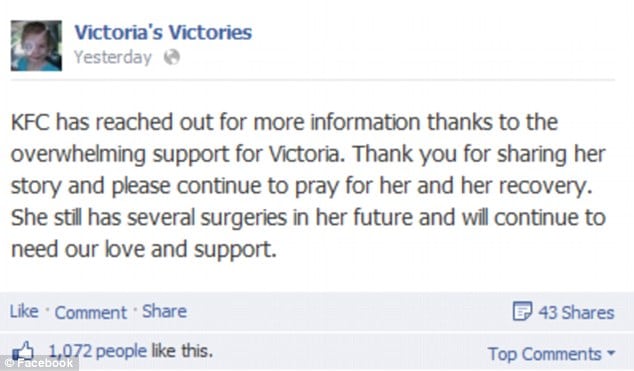 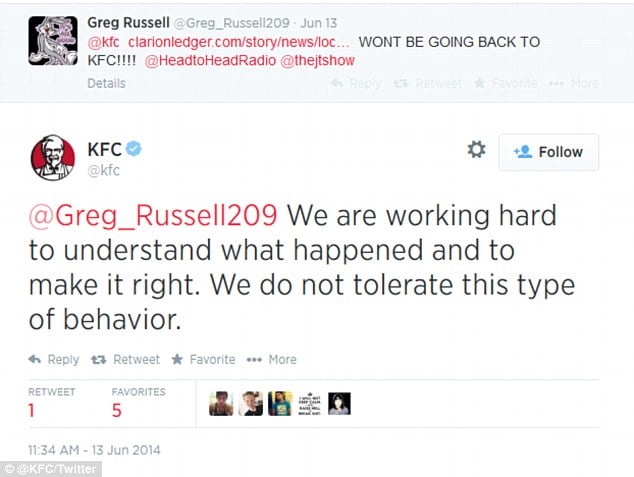 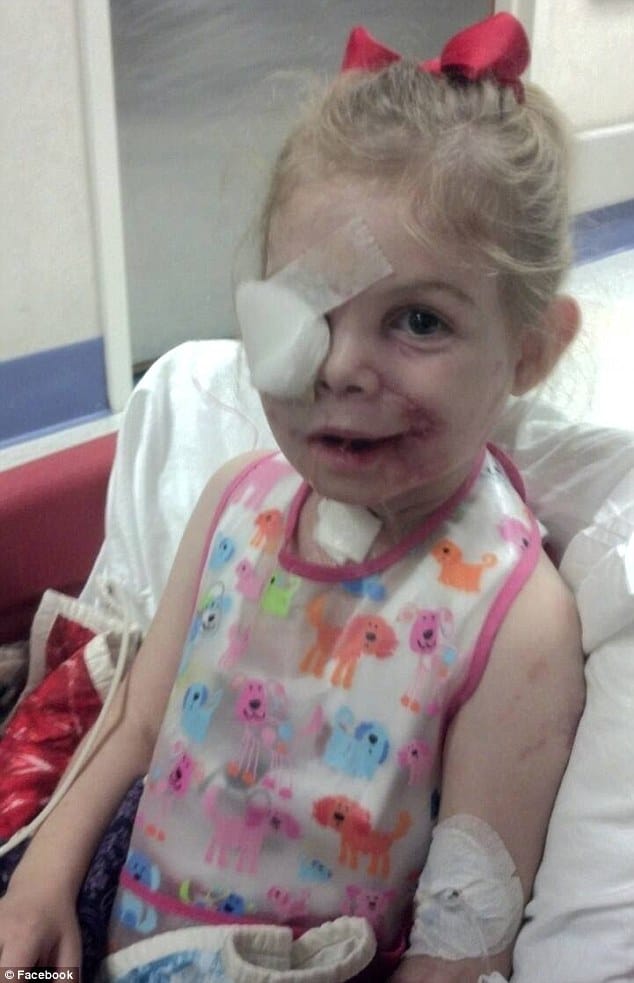