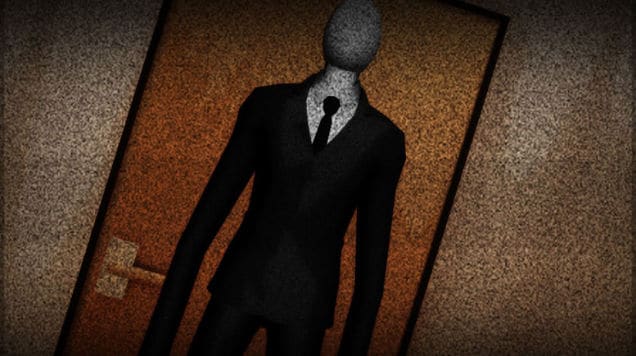 Since the revelation that 12 year olds Waukesha, Wisconsin 12 year old Anissa Weier and Morgan Geyser set out to kill an unidentified classmate in order to appease the Slender man myth, Creepypasta, an originator forum for the stylized myth came out yesterday to distance itself from the girl’s actions and to tell that it doesn’t condone violence. This despite the fact that the mythology is steeped in gore and violence.

Wrote administrators of creepypasta in a statement (note bold lettering):

ALL WORKS PRESENTED ON THIS WIKI AND OTHER SITES (INCLUDING SLENDERMAN, JEFF THE KILLER, BEN, SONIC.EXE, ETC) ARE FICTIONAL STORIES AND CHARACTERS

Of course, only a small minority of people (mostly newcomers) on the wiki (and the Internet) truly believe what they read here. And for most people, they will not attempt replicate atrocities presented in some of the literature on the wiki. Something like this was bound to happen, considering the size of the Creepypasta community. All it takes is one person to do something insane and radical in the name of someone or something.

And then continuing, obviously in an attempt to showcase the fact that a large appetite for such material has existed for decades and that indeed none of us should be surprised that as a society we are often fascinated by the supernatural, the paranormal, but at the same time most of  us are all able to distinguish between what a fictional character does on a tv show, a novel and what we ourselves do the next day.

Continuing:  “Unless you’re okay with blaming the world’s ills on Stephen King or H.P. Lovecraft, I don’t believe that it makes sense to say paranormal writing or an interest in the macabre should be blamed or even used as an indicator of a “sick” person (as a few emails have already felt the need to call both myself and all the authors here). The human race has long held and encouraged a fascination with things that go bump in the night.”

“I’ve tried to contact writers who sent in things that troubled me — particularly teens who were clearly writing out their own unhealthy, violent revenge fantasies — and tried to direct them to websites or hotlines where they could find someone to talk to if they were having trouble. For the sake of both my own sanity and that of my readers, I have policies about flat-out rejecting things that I believed glorified abuse or suicide.”

Administrators also offered offered condolences to the families of all three girls.

“I cannot even imagine how painful and confusing and awful this has to be for them,” the post says. “The families of the young ladies who committed this crime also have my heart going out to them — I know this can’t be easy for them as well, and I’m sure they’ll have to deal with mistargeted backlash and anger even while they try to get through such a trying time themselves.”

According to the Internet sleuths at Know Your Meme, the character of Slender Man was created in 2009 as part of a Photoshop contest on an Internet message board. How it came to dominate the imagination of some youths and individuals is a testament to the power of memes, social media and the avid fascination of users of the plain creepy and surreal and gory. A bygone love affair that America has had since eternity, beginning with tales of persecution of Salem Witches in 1692.

Since the course of the actions, some on the web have wondered how it came to possibly be that two young girls could fail to tell the difference between reality and dreams, gore, mythology and perhaps to what extent had the makers of such dialogue sought to perpetrate the notion that the acts and mythology of Sleepy Man were real, as often accounted for in first person? Something they probably never imagined anyone in their right mind taking seriously, until now…

Observed commentators on the web:

I took it as meaning to show that correlation doesn’t equal causation. Just like a mentally disturbed gamer doesn’t kill people because he’s a gamer, he’s mentally disturbed (and so might believe he’s playing Manhunt or whatever). This girl is disturbed, and it manifested as a belief in a fictional character, but that character (and that site) didn’t make her sick – the proof being all the other people who don’t go and stab their mates after being on the site.

I’m sure media will find some way to try to pin the blame on Creepypasta/the internet, rather than acknowledging the fact that yet again, two people who were clearly not of sound mind went and did what crazy folks do: Do something batshit crazy.

The source of this problem wasn’t the internet, wasn’t the media, and likely wasn’t even the parents, in this case. It was mental illness. There will always be disturbed individuals, in any society. If there are warning signs early on, and they are noticed, tragedy might be averted; if not, there needs to be some action taken to remove the threat before it happens again.