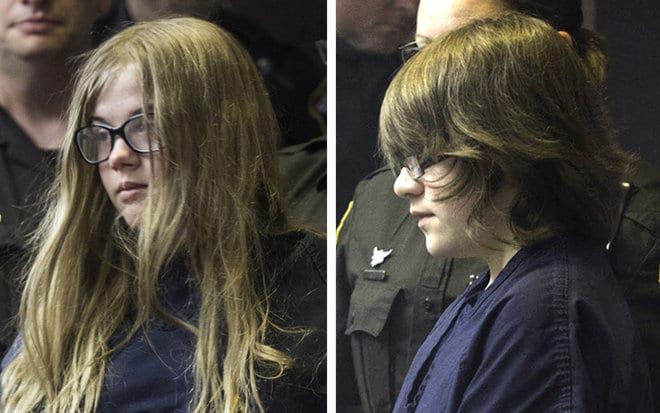 In the weeks ahead there will be a lot of questions as to the nature of 12 year old girls Morgan Geyser and Anissa Weier and how they could have ‘stooped’ to attempting to murder their classmate and friend who at the time had shouted back at the girls after being stabbed up to 19 times, ‘I hate you, I trusted you.’

One of those questions will be did the internet install the girl’s with sociopathic urges or were they sociopathic to begin with and would such tendencies have come out irrespective of whether it was an allegiance to a goth story or a general apathy to other human beings.

Told Morgan Geyser tellingly at the time of her arrest: ‘It was weird that I didn’t feel remorse.’

Geyser would then tell what she did was ‘probably wrong.’

A response which raises disturbing questions as to the girl’s state of mind, her parental guidance and her inability to tell from right or wrong, reality from fiction or perhaps reluctance to even adhere to moral codes of what came under transgressive behavior, not that attempting to kill another human for the sake of a legend wouldn’t strike most human beings wildly wrong, never mind probably wrong….

It has been proved throughout the course of history that certain situations, instances, followings, cults will lead to people abandoning moral code and behaving in a way that they perhaps could never have imagined possible, to the point of complete disregard and apathy towards other human beings.

Which raises the awkward question has the culture of the internet, memes and social media displaced people’s abilities to appreciate moral codes, compassion (note the steady rise of online bullying) and instead installed them with a view they can act with impunity, their identity undisclosed (internet bullies) or simply turn mythological characters that they come across on the web as proxy vehicles from which to live out diabolical fantasies, dark alter egos and characters?

Contemplates Student Operated press: How much time did Morgan and Anissa spend on this web site? Were there problems at home that compelled the twosome to take the Goth-leaning web site literally, where reality and dark fantasy become indistinguishable? Did the parents possibly enable the girls, if only subconsciously?

Creepypasta the outlet which has championed the preponderance of goth culture and violent characters has always told on its site that such characters were make believe and that it did not personally endorse such violence but realized nevertheless that there was an appetite for such forums and thus served to fill a vacuum. As noted in a statement that they released yesterday, which read in part:

ALL WORKS PRESENTED ON THIS WIKI AND OTHER SITES (INCLUDING SLENDERMAN, JEFF THE KILLER, BEN, SONIC.EXE, ETC) ARE FICTIONAL STORIES AND CHARACTERS

Of course, only a small minority of people (mostly newcomers) on the wiki (and the Internet) truly believe what they read here. And for most people, they will not attempt replicate atrocities presented in some of the literature on the wiki. Something like this was bound to happen, considering the size of the Creepypasta community. All it takes is one person to do something insane and radical in the name of someone or something.

Nevertheless one is compelled to wonder did two reasonably intelligent 12 year old girls who were most probably raised with a profound understanding of right from wrong, moral imperatives, could they have somehow simply have chosen to switch off because of a latent curiosity to go to the dark side or was it a situation that in fact both girls, or at least one of them was indeed sociopathic inclined and had simply used the guise of a myth and the internet to give herself permission to own up to her/their true nature?