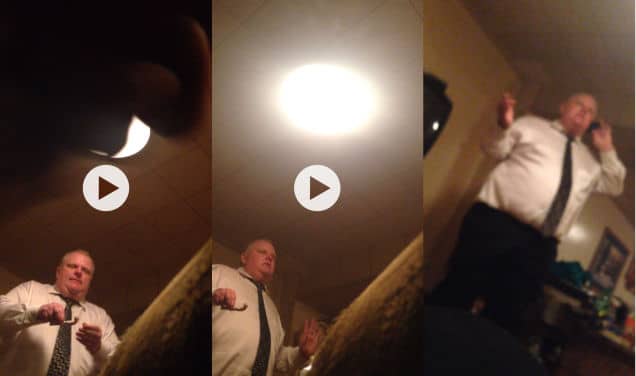 Pandemonium has hit the offices of Toronto Mayor Rob Ford as a new crack video is now up for sale courtesy of a dealer who recorded the beleaguered mayor getting wacked over the weekend at his sister’s basement.

Since it has emerged that a series of 3 new videos are up for sale Mayor Rob Ford earlier this evening announced that he is now taking a leave of absence and suspending his re-election campaign to enter treatment for substance abuse.

The seeking of counseling comes after the mayor previously refused to leave office when pushed by Toronto City Council.

Read a statement courtesy of Mayor Rob Ford late tonight: ‘I have a problem with alcohol, and the choices I have made while under the influence,” he wrote. “I have struggled with this for some time … I have tried to deal with these issues by myself over the past year. I know that I need professional help and I am now 100% committed to getting myself right.’

Since the tape has been verified by reporters at Globe and Mail Mayor Rob Ford has conceded at last that he does indeed have an issue with the good shit.

While a previous tape has never been publicly released, Toronto Police say they have a copy of it and Mayor Ford eventually confessed to smoking the substance in a ‘drunken stupor’.

The latest snafu includes that of an alleged drug dealer taking a series of videos this past Saturday night circa 1.15 am of Mayor Rob Ford smoking crack cocaine at his sister, Kathy, an admitted drug addict’s house.

The dealer is now asking for at least six figures whilst gawker has paid $10 000 for stills of the video. Their account of how they attained the stills is an unbelievable read on the treachery of drug dealers.

As an interesting aside the toronotsun, claims they have an audiotape from Monday of an ‘unruly’ Mayor Rob Ford ranting and cursing while ordering booze at a bar in Etobicoke, a Toronto neighborhood.

‘I’d like to f—— jam her, but she doesn’t want … I can’t talk like this … I’m so sorry,’ Ford reportedly says on the recording. ‘I forgot there’s a woman in the house.’

He reportedly tried to start a fight and bought shots at the bar. Naturally….

Toronto Mayor Rob Ford insists he does not use crack cocaine anymore.